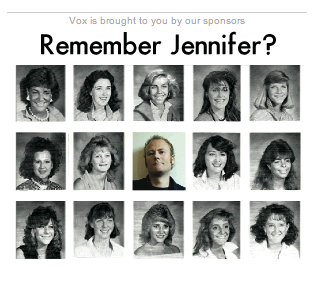 As a seasoned Web surfer, I have generally learned to tune out most all the ads I see. Something has to be pretty spectacular for it to catch my eye. Hell, I spend a lot of time creating some of those damn Web ads that block up the scenery.

Do you see why the ad above caught my attention? It looks like your typical yearbook bullshit classmates dot com ad, right? But as I was surfing away from the page it appeared on, I had to click back. Because some part of my reptilian brain said, hey you know that girl. In fact, I am pretty sure the pictures for this ad was ripped right out of the 1989-1990 edition of the Bengalore (that’s what our yearbook was called and its editor? why yes, that would have been me).

It was only as I was checking out the Jenny that I realized, hey, dude, that’s Mike Doughty! MIKE DOUGHTY.

And it was only after I clicked on the ad that I realized I totally forgot to get pumped up about the NEW Mike Doughty record and subsequent concerts (March 22 and 23rd at First Ave).

So there, now you have it. I’m excited.