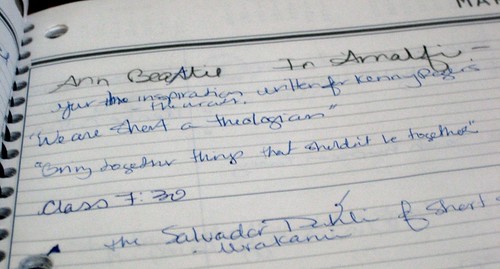 February 2007
01: Slow-talking theologian; always ask yourself, ‘where is the pigboy?’
02: 6 things that would increase my datability; Great River Review
05: Add ‘The Engine Driver’ by The Decemberists to I Write teh Book playlist
06: What was I thinking?
07: Eurydice, iPod fairy
14: Batman blows, but you don’t; pour some sugar on me, no seriously
15: Your Irish fucking punk band was Greenday?; Men Google themselves, women Google each other
16: I learned it from watching you Jodi, I learned it from watching you
18: theologian’s sweater
23: Own a raspberry beret, read that famous book by Nabokov, “Bang On – ”
25: File Under Easy Listening; Tegan & Sara – If You Went Away
26: Don’t tell a Soul revisited; “The TVmercial,” Like a monkey doing a math problem, Wrath

March 2007
05: Need verb for why they would care
06: In defense of ass-shaking — Smiley Faces, Gnarls Barkley; She Moves in Her Own Way; Chelsea Daggers
08: Not taking workshop well
09: “Vulnerable guy launches himself into fate.”
10: “When reading always try to sound like one of the Oak Ridge Boys,” Vodo
11: Things Fall Apart — Novel
14: She had eyes the color of well-worn blue jeans
15: You’re the Inspiration written for Kenny Rogers, Wrath; “We are short a theologian,” “Bring together things that shouldn’t be together,” Vodo
16: The Salvador Dali of short stories — Murakami
22: Think about ending on an image, you never do this
23: She danced all night and shook the paint off the walls
27: Mr. Excitement, Doughty + TMBG
29: Intimacy, 361 – Look for this Novel; “There’s these weird older women fighting at this kegger,” Vodo
30: One word review, “yum” redhaired guy — Kelly’s Ashes story; “His wife found my picture in her underwear drawer,” Ken

April 2007
03: “You slow burners scare me.”
05: Statler doesn’t shut the fuck up
06: I am sure this bullshit was written at the last minute; The 3 a.m. Epiphany, Brian Kitely
09: Gordon Lightfoot, If You Could Read My Mind; The Libertines, Tell the King; Old 97s, Book Of Poems; Rhett Miller, World Inside Record; In the Aeroplane Over the Sea, Neutral Milk Hotel; Couches in Alleys, DCFC; Songs about newspapers/journalists
11: Favorite songs that aren’t really sung, rather talked
12: Ken totally used Vonnegut’s argument from last time we workshopped this story. . .
19: Why do the trees speak in iambic pentameter?
20: I mean come on, they’re dirt monsters; charmingly weird; are you interested in a non-serious realtionships with women; was it just ass or sac too?
23: With freedom comes responsibility
25: I was maimed by rock and roll
26: Hey, I’m like Jesus but now I got a fireball
30: Look up: Great River Review, Tin House, One Story, Glimmertrain

May 2007
01: walked over my grave; it looks like Garrison Keillor’s flaccid penis
02: Chicago Seemed Tired to Everyday I write the Book
03: Titles: Characters would kind of be pissed off by the title
16: Stone Soup
17: Laid, James
30: Thunderboomer, Anyhoo, yea= what?, yeah = yes, yay = excitement
31: 1 year of post-it note

June 2007
04: Being sensitive to the energy of the material, decided to fill up my soul
05: Enjambment makes readers anxious
06: Follow the tangent, Look up Raymond Carver’s poetry, telling lies in service of the truth
11: “My penis is better then the best thing ever.”
12: Figure out the music of the line, “Eternal Sunshine is our Breakfast at Tiffanys and well that’s one thing we got.”
21: (pathetic fallacy)
22: On this day I wrote down the first and last names of about six poetry classmates so I could Google them like the psycho that I am
26: She’s really working that line break
28: Boldness is genius, power + magic; metapher — damnit it is something; see the accumulating power of images

July 2007
02: I have mystical visions and cosmic vibrations, America/Obit Desk, So furious with orthodoxy
11: “Did you just whatever my hello?”
12: She reeked of insistent perfume, star six nine
19: The Viking thinks I am staring at him when really I am checking out the curly darkhaired beauty outside on the 3rd floor deck; hans needs comments read to him = die die die
20: I am a loomer, I loom; find a relationship between uncommon things; try to write a short story as a poem; it’s boring listening to everyone agree with Jude
26: The pony healing ritual, F. Scott used pathetic fallacy in Beautiful & Damned
27: Desire 1; Play 4; Close 5; Bullet 6; Child 3; Rain 2; I kind of wanted some enjambment