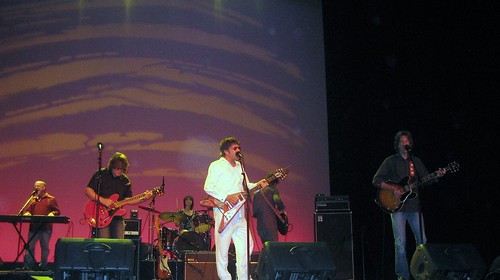 Okay, did I forget to mention that during the Fakebook event we were treated to beyond-amazing musical performances by Steve Wynn, Mark Olson (The Jayhawks), Lori Barbero (Babes in Toyland), and well, St. Paul Westerberg himself?

Holy shit. During the intermission Westerberg strode on stage leaned into the mike and said, “We supposed to kill time.” Then he and some buddies busted right into a cover The Rolling Stones “Mother’s Little Helper.”

I had to apologize to the guy sitting next to me because I crapped my pants. “Mother’s Little Helper” is my third all-time favorite Stones’ song (after “Dead Flowers” and “Get Off My Cloud”). They also did The Stones’ “Loving Cup.”

Westerberg and his crew left the stage when Lucia and Lindeen came back out to talk some more about the book. How a lot of the conversation worked is that Lindeen would talk about an episode from the book or a musical influence, and that person would come on stage and perform. It was fucking amazing.

When it was Westerberg’s turn to come out and serenade his wife, Jim Boquist (who played in His Only Friends Band during the ‘Folker’ Tour back in 2005) strode on stage with him and plopped down in a chair with his back to the audience.

“This is a song written for an actor who can’t sing,” Westerberg said, and then started playing “I’ve Grown Accustomed to Her Face” from “My Fair Lady.” It sounded kind of weird, like there was a strange echo. But then I slowly realized that Boquist was up there feeding Westerberg the lyrics. You could hear Boquist’s whisper about 14 seconds before Paul sang the line.

While he was singing this song, Laurie totally lost it. She was shaking and dabbing at tears. It was so moving, because earlier in the night she had told the crowd that she was the most gushy, sappy romantic there was. She had also told us how she had grown up on musicals and that she turns to them when she needs comfort.

“When people get sad in my family, they put on ‘Oklahoma,’ ” she said.
“My family drinks,” Lucia replied.

After that, Boquist left the stage and Westerberg ripped into a new (or at least unheard of by me and my Westernerd friends) song that we dubbed “Goddamn Angel.” The song was about a Goddamn angel and her future ex-husband and how he’d wait for her in hell and about how if some guy mistreated her he’d go home lame.

Fucking A people, do you have any idea how much I love new Westerberg songs? This one was just so ripe with all the junk that goes on between people in a relationship. It was seriously such an intense, personal song that I felt a little uncomfortable watching him sing it for her. I felt as though I was peeping in their bedroom window. 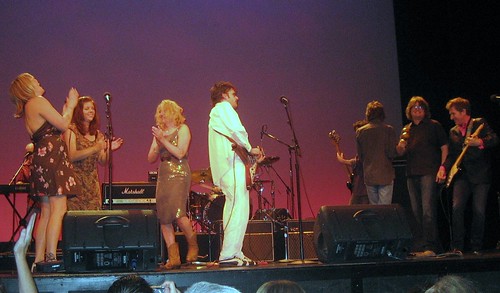 The finale of the show was Lindeen reading a excerpt from the book, where she talked about how her favorite song as a child was “Daydream Believer.”

Then like the whose who of Minneapolis Music Royalty popped on to the stage to do an all-star version of the song.

It was so cute because Co (the bass player for Zuzu’s Petals) and Lindeen kept calling for Lori B, Lori B (Lori Barbero formerly of Babes in Toyland, who Lindeen had mentioned was a huge influence and really paved the way for so many all-girl bands, which prompted Lucia to ask if anyone had given Barbero the key to the city yet because she totally deserved it).

“Lori’s off at the Greyhound station welcoming people to the city and offering them a place to crash,” Lucia said.

Eventually Lori B. joined the rest of the group on stage, and while everyone (Lindeen, Westerberg, Wynn, Boquist, et. al) sang she popped around the stage with a camera taking pictures of all her friends. It was the cutest thing ever.