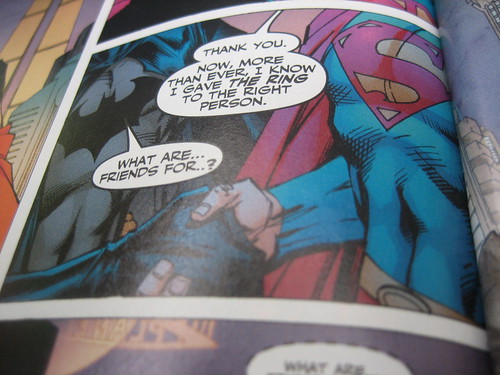 In class on Thursday we workshopped a story that had a wonderful premise. In the story a man is afflicted with all the diseases ever, a condition called Itisitis. With the Itisitis comes a superpower, the ability to give it away. Anyway, like I said, the premise was pretty kick ass.

So, as it often goes when you have stories that contain the supernatural the class talk turned to believeability and that kind of nonsense. Some of the points my mates brought up were pretty good, I can’t deny that. However, sometimes I get a little agitated and defensive when people try to inject all this real-world stuff into stories that might look like they are taking place in our world but that aren’t really. At one point I told Kelly specifically and the class in general that they all needed to read more Batman comic books*. Which, of course, made Vodo laugh so hard that all he could do was mutter Batman and roll his eyes.

But it’s true! With just a little bit of comic book appreciation, you can totally suspend your disbelief easier.

Of course as is the way with my multi-personalitied self, I was the one crying out about the unbelievable shenanigans in the other story. “I just don’t buy that she’d be able to use her headset to connect to her Blackberry to connect to the GPS device in the middle of some stormy north shore lake that fast,” I said. “I mean come on, that’s some smokin’ WiFi. I can’t even connect to the Coffee Gallery downstairs that fast!”

It was then determined that I was a supergeek, which is true.

After class we headed to Grumpy’s with some newbies in tow, where I formulated Crackpot Theory #29. Itisitis was one of the newbies to imbibe with us. We talked a bit about his workshop and tried to heal his wounds with beer.

At one point Itisitis asked what the difference was between literary fiction and science fiction/fantasy/genre fiction. Being the bossy know-it-all that I am, I piped up with a definition that I stole from either Dale or Vodo.

“Sci-fi or fantasy or any genre fiction is usually plot or setting driven.” I pushed up my glasses. “Where literary fiction is generally character driven.”
“But I read tons of sci-fi that’s character driven,” Itisitis said.
“I am sure you do,” I said. “But generally the stories in sci-fi and fantasy depend more on developing the plot and setting up this other world and unicorns than what the characters think or do.”
“It relies more on the traditional conventions of the genre,” Jeanette Winterson Fan Whom I Love, said.
“Can’t something be both literary and sci-fi?” Itisitis asked.
“Of course,” I said. “You should read Kevin Brockmeier’s ‘The Ceiling.’ I think of Kurt Vonnegut is sci-fi, Slaughter House Five, Cat’s Cradle total sci-fi.”
“I don’t consider Slaughter House Five sci-fi,” Kelly said. “Vonnegut’s not sci-fi.”
“He sure is,” I said. “Ice-Nine? Time travel? Total sci-fi.”

The arguing about sci-fi and literary fiction continued, and then my Crackpot Theory #29 suddenly popped out. Because I am getting a little smarter everyday, I had to qualify my theory before I even said it. What I was about to say was going to come off as incredibly bitchy.

“You know,” I looked at Itisitis. “I’m not talking about you specifically, but about sci-fi/fantasy readers in general. Y’all are a defensive bunch. I’ve never met any reader that’s as defensive about their reading selections as sci-fi/fantasy readers are. It’s as though they feel like they have to defend their entire genre all the time. They just don’t feel like they’re good enough. You should enjoy what you enjoy and not defend it. Because, by being so defensive you are the one making your genre seem less than. As if it needs constant explanation and defense.”

I think midway through my impassioned explanation everyone stopped paying attention to me.
*incidentally, if you want to give about 20 men a hard-on all at once, just be a girl at a bowling alley reading a comic book. I brought Hush, Vol.1 to the bowling alley a few weeks ago and seriously, you would have thought I was serving free beer topless for as much as it excited the bowlers.

@winnerbowzer I forgot about that until right this second. “It’s time for swish!”

Jason Isbell & his five-year-old daughter are on Instagram Live singng her favorite songs so far they’ve done Blackbird, I Wanna Hold Your Hand and now Pancho & Lefty and I am dead.

Today’s #DailyWendell song is “Wasted & Rollin’” by Amanda Shires. And yes his favorite place to sleep is still in top of the yarn I’m using for my current project. pic.twitter.com/Gy1c…