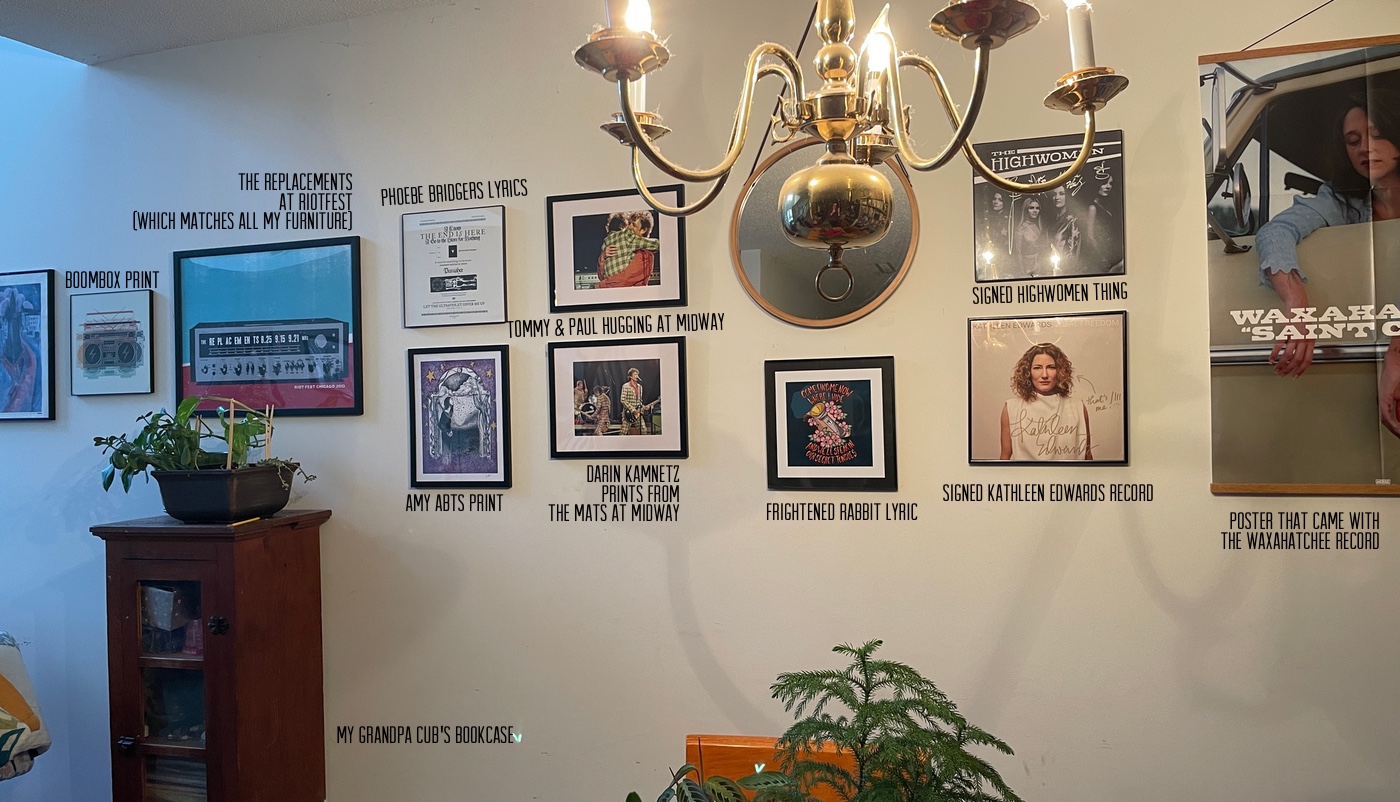 I would like you to know that I gobbled up a cold egg roll before I began typing this letter to you. Nothing makes me feel more pathetically single than eating cold Asian food straight out of the to-go container. However, I also love this played out stereotype a whole bunch. The only thing that would have made it better is if I were talking to Wendell while doing eating the egg roll. Or maybe crying prettily while singing “I Will Survive.”

Sorry to say, I was doing none of that. Instead I was adding labels to the header picture and smiling at my laptop.

The Youth came over for lunch today and to finish hanging up all the things I wanted in the dining room. We had bahn-mi and egg rolls.

And if you look at that labeled header picture you can see I am now the woman with the coolest wall in the entire world. Do you want me to walk you through my crap? Too bad.

We begin with a boombox print I got on Etsy because I like boomboxes.

Next is a Replacements’ RiotFest poster I got because it matches my furniture. Is there anything more Rock & Roll than that? I didn’t think so. Also, that is my Grandpa Cub’s bookcase which he bought for like a nickel from a junk shop back in the sixties or something. It is one of my most prized possessions.

After that ‘Mat is a letterpressed lyric sheet I got with Phoebe Bridgers’ record “Punisher” and beneath that is Crows by Amy Abts.

Because I’m a huge fucking nerd, I’ve got two photos taken by Darin Kamnetz from The Replacements when they played Midway Stadium. Darin very kindly sent them to me years ago and I’m so happy to have them on my wall.

Underneath the mirror I got for Christmas is an illustration of a Frightened Rabbit lyric that I also got on Etsy. I super love this because the lyric on the print is not the one I hear in the song. I kind of like what she hears better than what he sings on “The Woodpile” because I feel like I am hiding here in Supergenius HQ and I would like someone to find me so we can speak in secret tongues. And by secret tongues I mean makeout, just so we’re clear.

On the other side of the mirror we got the one-two punch of signed stuff from The Highwomen and Kathleen Edwards, which is what you get when you pre-order records on the day they’re announced. Yee-Haw. I have more signed records (Bully, Amanda Shires, Jason Isbell), but those didn’t come with extra sleeves so they have to actually hold the records.

Finally, it’s a giant Waxahatchee poster that came with the “Saint Cloud” record.

That’s all I got, Darling Ones. I’ve been a little sad and out of sorts this week, and doing my best to escape my chattering brain by reading a lot or watching “Mad Men” while trying to invent a new blanket.