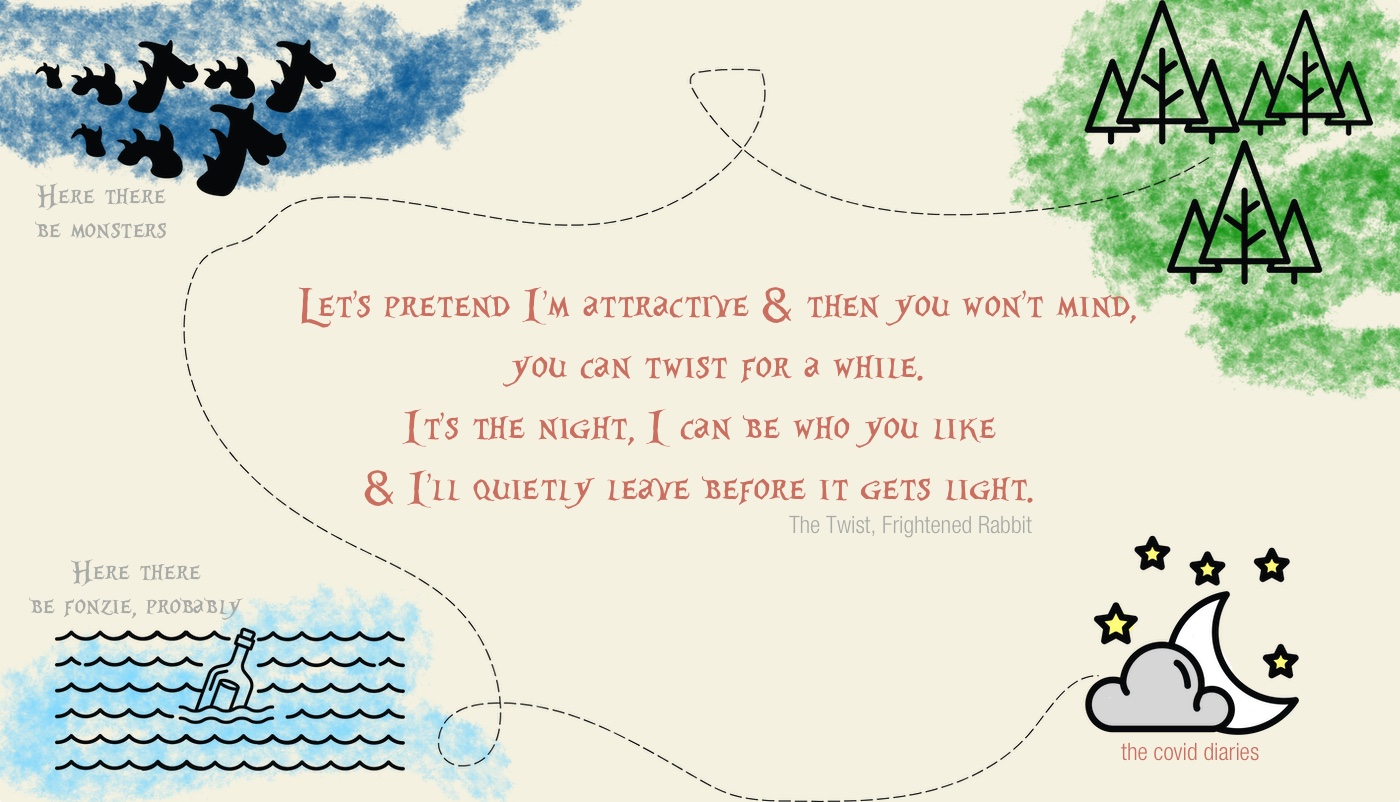 I’ve suffered with insomnia for most of my life. I had a tumultuous, insecure childhood which made me anxious and unable to sleep. When Ronald Reagan was elected I spent most of the 80s awake in my bed fearing nuclear war. My battles with sleep have been well-chronicled in the pixels of I Will Dare.

Since I was a kid one of my self-soothing, pre-sleep rituals was telling myself romantic stories. It started with Fonzie, of course. As I’ve mentioned before I knew I wanted to make out with boys the minute I saw Fonzie on “Happy Days.” Not gonna lie, I’m still a sucker for a man with good jukebox* skills.

The fantasies I loved to unspool in my unsleeping brain were based on the episodes involving Pinky Tuscadero where I was, obviously, Pinky and Fonzie loved me. Night after night he would rescue me from the hood of my car after I was injured in the Malachi crunch.

I carried this habit up from childhood, Fonzie being replaced by boys I knew and wanted to make out with. My sleepy-time stories are always of a romantic bent, sometimes they’re sexy if I’m so inclined. As I grew into adulthood I favored imaginary love triangles featuring two guys I had a crush on, if there there two. Sometimes it was an ex and the next. Sometimes it was the current and the next. My brain loved the idea that I would get to choose between two men and the internal debate would put my to sleep.

The problem with these kinds of fantasies and my brain is that often I’d trip into the past where the monsters lie. My not-sleeping brain is a huge fan of recounting every shitty thing I’ve ever done to another human being at any point in my life and then shaming me for it. A few of its other greatest hits include: chastising me for poor decisions and regretting every chance I did not take because I was scared.

Oftentimes my self-soothing fantasies are a total fail. Would I rather lose sleep over current woes or past ones? Not the kind of triangle I wanted to be a part of.

For the most part I had left insomnia behind when I quit working an office job. Without a wake-up deadline I slept much easier. Then came all the suicide attempts of 2019 and out went sleep. I’ve said before 2019 was a motherfucker and a large part of that was how four people I love tried to end their lives and one more contemplated it. As you know, 2020 wasn’t much kinder, and while we’re only ten days into 2021, things aren’t looking too peachy.

They are the new musical love of my life. I am obsessed, and I’ve kind of kept a lid on it because I’m not ready to share the whys and hows of this new love. Also, I don’t feel like listening to everyone tell me how late I am to this party. I know that already. I am late to all the parties. I didn’t find The Replacements until 1995. I didn’t discover The Rolling Stones until the mid-aughts. It’s more shocking when I discover a musician early and not when the party is long since over.

What I will say is that while I was in the deep, dark depths of mourning my last relationship, a friend told me to listen to Frightened Rabbit and I finally listened. I found a new musical soulmate.

I’ve watched this video of a 2012 performance of “Keep Yourself Warm” so often I’m officially married to the kid in the striped shirt next to arms-crossed guy. His name, I decided, is Fergus and we’re very happy together because he brings me chocolate chip cookies while I’m writing. Do I fantasize about imaginary Fergus to help me fall asleep at night? Nope, because instead I listen to Frightened Rabbit’s album “Midnight Organ Fight.”

One night in the pits of sadness and despair and exhaustion I remembered the two years my family lived in a big house on Court Street in Chippewa Falls, Wisconsin. I think we moved into the house in October of 1990 after a summer of what was basically homelessness. My three sisters shared a huge room and I slept in what was essentially their closet. It was a magnificent closet with built in shelves and cupboards, a window that overlooked the backyard, and just enough room for a twin-size bed and a table that held my stereo. Every night for about two years I listened to one-side of a mixtape I made from a record I checked out of the Chippewa Falls library of Beatles love songs. If I thought about it long enough I could probably remember all the songs on that one side, but I can’t right now.

When I remembered that mixtape I thought, Yes! That’s the cure for my insomnia.. I didn’t settle on “Midnight Organ Fight” right away. I tried Waxahatchee’s “Saint Cloud” and Phoebe Bridgers’ “Punisher.” I even gave Liz Phair’s “Whitechocolatespaceegg” a shot for a few nights. None of these worked. I don’t know why, but at the end of each of those albums I was still awake.

Since I’ve started listening to “Midnight Organ Fight” as I fall asleep I’ve become the All-Time Queen Champion of Sleep (yes, I’m worried writing about this is a goocher, but it’s a chance I’m willing to take, obviously). It’s become part of my sleep ritual. Turning on this record and setting Spotify’s sleep timer is the last thing I do before I take my glasses off, rollover, and close my eyes.

It is such a sad and lovely record. I’m comforted by the sadness in the songs. The lyrics make me feel less alone for the most part, though the ending of “The Modern Leper” sometimes hits me hard. You should sit with me and we’ll start again, and you can tell me all about what you did today, what you did today. Because yes, dearly departed Scott Hutchison that is exactly what I want, someone to tell what I did today. On the many, many, many nights where I’m going to bed after not having spoken to a single soul, this one gets me a little choked up.

Thankfully, it’s the first song on the record and it moves quickly to other songs that don’t hurt as much. What I like is that the lyrics and the music are interesting enough that when my brain tries to sneak off to where the monsters lie it’s pretty easy to make it pay attention to the song.

I know the first ten songs on this album by heart. Every note. Every word. But only the first ten because I’m usually asleep before “Keep Yourself Warm” (the tenth song). There’s many nights where I don’t even make it to “Bright Pink Bookmark” (the seventh song). It is wonderful.

How do you sleep at night, Darling Ones?
Jodi

*This wasn’t originally meant as euphemism for my lady parts, but rather I meant it sincerely as men who have good taste in music, but now it cracks me up and I will henceforth refer to my genitals as the jukebox and much like Dawson Leery’s cryface it will never not make me laugh.