I can always tell if a mystery is really good because the moment I finish it I will text my friend, Adam, and tell him how much he needs to read it so I can talk about it with someone. That’s exactly happened after I stayed up until like 2 a.m. one night finishing Karin Slaughter’s The Good Daughter.

For the most part, I gobble up mysteries like their Chicken McNuggets. They’re delicious going in, but they don’t stick with you for very long and when you’re done you feel a little . . . off. This does not stop me from gobbling up mysteries or McNuggets, occasionally at the very same time. 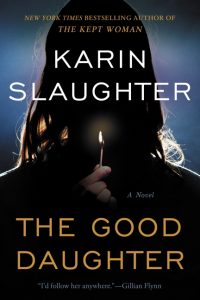 (Aside: I recently listened to What Happened by Hillary Rodham Clinton and she too has coped with the Fascist, Racist Gameshow Host who is “leading” our country by losing herself in mysteries. See? She’s just like us!)

So mysteries, yeah. I don’t write about a lot of the ones I read because my feelings about them are generally “Eh. It was alright. Better than a “Friends” rerun, not as good as watching “The Good Place” for the 7th time.” This means I usually only end up writing about the really good ones, or the really shitty ones.

The Good Daughter, as I mentioned is a good one. It passed the Text Adam test, which hasn’t happened in awhile.

The other problem with writing about mysteries is you don’t want to give too much away and ruin it for people. I like to go into them as blind as possible because a lot of times you can guess the whodunnit by like chapter 3. In really good mysteries you might be able to guess whodunnit but that doesn’t even ruin it because the whole story is that engrossing.

That’s The Good Daughter. I guessed who did it pretty early, but that doesn’t mean there weren’t plenty of twists and turns I didn’t see coming. This one’s about estranged sisters who witnessed their mother’s horrifying murder, their shitty defense attorney dad, a small Georgia town that won’t let anything go, and a school shooting.

There’s about four mysteries packed into this one book and some of the reveals made me gasp. So good! Read it.