In the before, the dark times of one week ago I did not know Nutter Butter cereal was a thing. Also, I didn’t realize Nutter Butter was singular and not always plural. In my life they are Nutter Butters, always with an S.

Longtime readers will know that I’ve been trying to get a Nutter Butter sponsorship for this blog since the inception of blog sponsorships. Why? Because I love Nutter Butters. They are my favorite packaged cookie and the only brand I would willingly sell out to*. My love of Nutter Butters is well-documented in the pages of I Will Dare, searching will bring up four pages of posts.

Because of this documentation, when longtime reader & Facebook Friend Lori spied the Nutter Butter cereal in her local Walmart circular she took to Facebook to find out my feelings on the cereal.

Having no idea such a thing existed, I took to the Internets to see where I might locate some of this potential glory. Sadly, as far as I can tell it’s only sold at Walmart and I ethical qualms about shopping there. However, my BFK & her husband Atom have zero such qualms and I have zero qualms about asking my best friend to pick me up some cereal next time she’s at the evil empire.

And yet, I was still a little surprised when there was a knock at my door yesterday afternoon and there was the best best friend with a box of cereal in her hands. “Happy Valentine’s Day,” she said, and turned to go back to the truck where Atom was waiting. She really is a girl after my own heart.

I wish I were the kind of person who tore right into that box and poured myself a bowl. Maybe I would have been if I hadn’t made myself a monstrous lunch of eggs & potatoes. For dinner I had a salad. There was no room in my daily diet for a bowl of Nutter Butters cereal.

Until this morning. After lolling in bed until after 10 finishing Heart Berries by Terse Maria Mailhot (which was phenomenal and you should read it. . . more about that later) I was starvation nation.

I poured that cereal into a bowl with giddy delight and thanked my luck stars that I had milk in the fridge. I don’t buy a lot of milk because I don’t ever drink it, but I plan on making mac & cheese for dinner tonight. 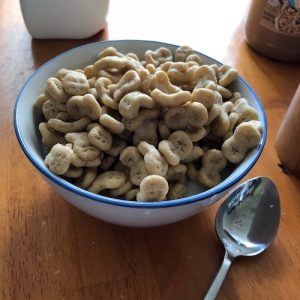 My first thought as I crunched into the cereal, “Hooboy, this is sweet.” I don’t know if the sweetness is more than other sugared cereal as I don’t eat cereal all that often after the demise of my much-beloved Multi-Grain Peanut Butter Cheerios. God damn you, General Mills, you sons of bitches. And don’t come at me with your Peanut Butter Chocolate Cheerio nonsense. Chocolate cereal is an abomination in the eyes of Snap, Crackle, and Pop.

So after devouring a giant bowl of Nutter Butters cereal, what’s the verdict? Not too shabby. It’s not as peanut buttery as Peanut Butter Cap’n Crunch. It’s more substantial though and it was crunchy from first bite to last. Also, none of that dreaded Cap’n Crunch mouth meat.

Will I go out of my way to procure more? Probably not. Will I enjoy the hell out of this box and be a little sad when it’s all gone? Definitely.

It’s a solid addition to the lineup for peanut butter cereals and if they ever make it more peanut-buttery and less sweet I might make an effort to bring it into my house more often.