I woke up at 7 a.m. this morning with “I Wanna Dance With Somebody (Who Loves Me)” circling around my head. This seems appropriate because I’ve been meaning to write a post about lipstick since about Tuesday. However, work got in the way.

Even though it’s been nearly nine years since I started this freelancing odyssey and I never, ever want to go back to the cubelife, sometimes I miss all the “free” time I had sitting in front of a computer doing nothing while at work. Like, I never blogged so much in my life as I did when I had a 9-5. 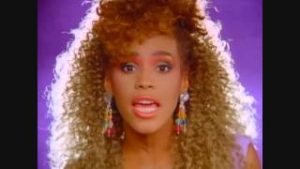 The Whitney song rambling through my brain is appropriate only so much as this is going to be a partial post about my life in the 80s. When I talk about the tools of the trade the ultimate goal, really, was to look like Whitney Houston in that video. I mean, come on! The hair, the eye shadow, that black and red skirt like if those aren’t STILL beauty goals, I know nothing about beauty.

(editor’s note: I know nothing about beauty)

For my whole life I have loved makeup. My love of it probably stems from a sort of rebellion against my dad who outlawed makeup because of asshole controlling tendencies. Thus, I coveted makeup and bought it with every spare dime I had.

For a majority of my life I have worn zero makeup. I don’t know how to make sense of the two other than I love sleep more than I love makeup. Also, I don’t like to have stuff on my face. And another thing, I am lazy when it comes to my personal appearance. This laziness re: makeup isn’t something that came along with work-from-home hermitude either. I’ve not worn makeup on a regular basis since September of 1986, or close to it. 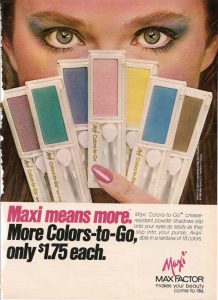 But oh, back in 1986, I was the queen of makeup and beauty. I had a Caboodle (one of the very first, I’m sure) filled with wonders. Maxi-to-Go Eyeshadow to match every color of every shirt I had for I was of the belief that your eyeshadow should match your shirt. I’m not sure why I decided that, but a very nice girl named Tracy told me in the early days of seventh grade that maybe it wasn’t such a good idea to match your eyeshadow to your shirt. I took her advice to heart because she was in ninth grade and of course she would know these things.

I also had blush and powder by Covergirl that came in those faux-tortoise shell plastic cases, eyeliner that you’d melt with a lighter because someone somewhere told some girl that’s what you did and so we all did it for exact reasons I never knew. And of course, that Maybelline mascara in the pink tube with the green cap. 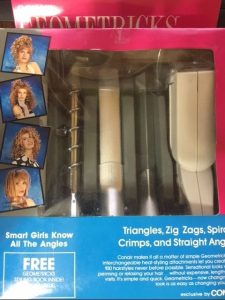 Also in that Caboodle? My Geometricks curling iron. I distinctly remember using it exactly once, spiral curling all my hair while sitting in front of back-to-back episodes of “Jem” and “She-Ra” before school.

It took for-fucking-ever to curl your hair with that spiral attachment. We’re talking at least an hour. Sure the payoff was great and lots of people noticed, but sleeping is better than having people notice your nice spiral curls.

Just typing about this I can smell the chemically-apple scent of Salon Selectives. Do you remember how revolutionary Salon Selectives seemed in the 80s? Hairspray that smelled good? It was amazing.

So yeah. I like makeup. I like reading about it. Back when I had disposable income and only read Sweet Valley High books, I really liked to buy makeup. Sure it was a waste of money because I usually wore makeup and did my hair for about one-week or so in September from the time school started until the day after school pictures were taken. That’s how long the novelty lasted. Then I was back to wearing ponytails and sleeping in.

This laziness followed me up through junior-highdom all the way into adulthood. There was a brief flirtation with those brown and raisin-colored lipsticks in the mid-90s. And occasionally I go through a nail polish phase, but for the most part I haven’t bought or worn makeup since the 80s.