Back in the mid-90s during the in between time post-college and pre-real job, I lived with my parents in Shakopee so did my Grammu and Sisters #3 & #4, along with #3’s boyfriend. Sister #2 & Ben, freshly married, lived up the street, literally on the other side of the train tracks. The train tracks ran through the backyard of the house my parents rented.

One thing you should know about my Grammu is that she loved Pall Malls, white wine, and card games. We spent endless hours from childhood on into adulthood playing Rummy 500, Thirteen, and Uno, especially before she died. We got this Uno Attack game and she delighted in calling it an asshole whenever it spit out a bunch of cards at her. We all delighted in it.

Along with these card games, we played a lot of Yahtzee. It was a big ritual. We’d gather around my parents’ dining room table, grabbing extra chairs and TV trays to hold our beverages and ashtrays. We all smoked cigarettes back then, except for Sister #3 and her boyfriend. By the end of the night a thick blue fog would hang above the table. 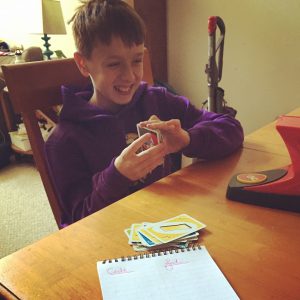 These endless games of Yahtzee were a bunch of fun, even with Sister #3’s shitty boyfriend cheating all the time. He was a real dirtbag, that one.

We’ve played Yahtzee a few times since the 90s, but those days seemed to be well behind us until August.

One night at family dinner, Sister #3 mentioned how she had become addicted to Yahtzee with Buddies. We all laughed at her new addiction and the conversation moved on. The following Tuesday, Sister #4 was here at Supergenius HQ and we were crawling the walls. It was the day my dad was getting results of his PET scan. They had found a spot on his lung when he was in the hospital in June with pneumonia.

When Dad went back in a month or so later for a checkup, his primary care doctor didn’t think much of it since the spot didn’t grow. The scheduled a biopsy just to be sure. When they didn’t give him the biopsy results over the phone and instead scheduled him for a PET scan, Sister #2, the former hospital social worker, became Dr. Doom, PhD. Her anxiety was infectious. As soon as I heard the words “PET scan” all I could think of was that scene in The Fault in Our Stars when Gus tells Hazel that his cancer has returned “I lit up like a Christmas tree, Hazel Grace. The lining of my chest, my left hip, my liver, everywhere.”

That line echoed inside of me every time Sister #2 talked about lung cancer and how that spot had probably metastasized from some other place in his body. She was hoping for the kidneys, though she said it is often the brain. All those years working as a hospital social worker plus her anxiety-driven googling were not helping things.

She was so worried about the results she made Sister #4 come home from Fargo, and that’s why we were crawling the walls of my house waiting on a Tuesday afternoon with nothing to do but wait to hear about the results after Dad’s 4 p.m. appointment.

Enter the random line from Sister #3, “I’m addicted to Yahtzee with Buddies.”

Sister #4 and I installed it on our phones and played for the next two hours until it was time to go to Mom & Dad’s for the news. As soon as we walked into the house I told Sister #3 that we were playing.

For about a month, my sisters, brother-in-law, niece, and nephew have been playing nonstop. Last week, in the Sister Club group text message where Sister #2 live-texted Dad’s meeting with the oncologist (she was on the phone with them from Portland), she implored all of us to take our turns in Yahtzee.

Saturday at Rock & Roll Bookclub I confessed my Yahtzee addiction to my friends. Now BFK & Atom are playing on the reg. This all delights me the way Uno Attack delighted my Grammu. It reminds me of my family and helps with the anxiety over Dad’s uncertain future.

For the record: The cancer had not metastasized from his brain or his kidneys. It seems to be just in that one area on his lung. Though there were two other bright spots on the PET scan (hardly a Christmas tree) — one around his jaw by his ear and one in the lymph nodes in his chest — so far those biopsies have come back negative, but of course they’re doing more testing to be sure.