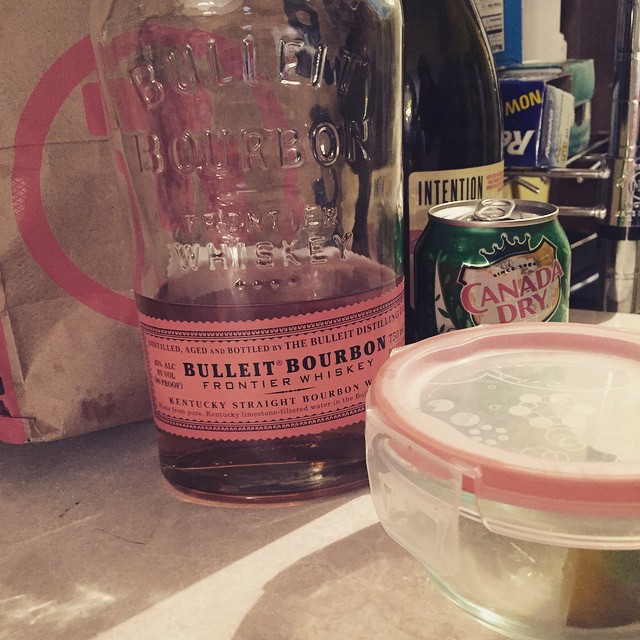 I spent my Valentine’s Day on the couch with some Potato Oles, a bottle of Bulleit, and my Fabulous Friend Jodie (FFJ). We laughed and drank until about 3 a.m. and then crawled up the stairs and passed out. My dreams were plagued with images of driving on snowy, slippery roads, and being at some odd party where a handsome Australian man kept playing with my butt.

The morning came ridiculously early when Paco, my asshole cat, decided that eight was the time to get up because goddamnit he was hungry. I put him off for about an hour but then when he got super persistent with the meowing and climbing all over me, I hauled my weary bones from the bed, but mostly because the coffee maker turns off at 9:30 and I needed some of that shit.

I was surprised as I settled back onto the couch with the coffee and a packet of Pop Tarts that I wasn’t actually dying for a hang over. Sure, my sinuses felt like they were trying to escape my face, but that was hardly the fault of all that whiskey, right?

As FFJ continued sleeping upstairs in the guest room I decided to do some follow-up investigation on some of our conversations, specifically the “Whatever happened to. . . ” portion of the night.

Because it was Valentine’s Day we spent a lot of time talking about men and sex. My couch would not have passed the Bechdel test last night.

And I had no answer, which made me kind of sad. Like how do people just drift out of your life. I couldn’t remember why or how it happened or even if it was me who drifted from him. Of course as soon as the topic came up I set my fingers to Googling. I found him. On Twitter. But FFJ made me promise not to do anything until the morning because how sad would I look if I was following him on Twitter at 2 a.m. on Valentine’s Day?

So while the first swallows of coffee were seeping into my brain I found him again. And he is happily married and that made me happy for him. And then I followed him on Twitter, because of course I did.

FFJ finally roused from slumber around 11 a.m. and we debriefed on the night until she had to go gather her children and attend a family brunch.

At about this time I set about making Family Dinner, which I hosted. In a brilliant stroke of prescience, I had decided on Thursday to make chili and also serve hot dogs, because chili cheese dogs are just about my favorite of all junk foods. And if you are making the chili yourself by chopping a ton of vegetables and all that, it virtually takes all the guilt out of chili cheese dogs.

Once the chili was crocking and I gobbled down a plate full of scrambled eggs the only sensible thing to do was take a bed nap. Bed naps are my favorite all naps.

I don’t often bed nap because that means you’re really going under and not just laying on the couch in hanging out in that precarious place between sleep and awake.

Sister #2 texted me awake around 3:30 asking why she needed to bring hot dogs buns to dinner if we were having chili.
“I thought we could have chili cheese dogs,” I texted back.
“That sounds really effing good,” she said. “I’m a bit hungover.”

So Family Dinner was really effing good. For unknown reasons my family was surprised by how good my chili was, even though I’m well-known as an award-winning chili maker. I keep the trophy on the top of my cupboards.

Now I am sitting in front of the rather boring SNL 40th Anniversary show and typing about napping and chili.

I am the most exiting person who ever lived.