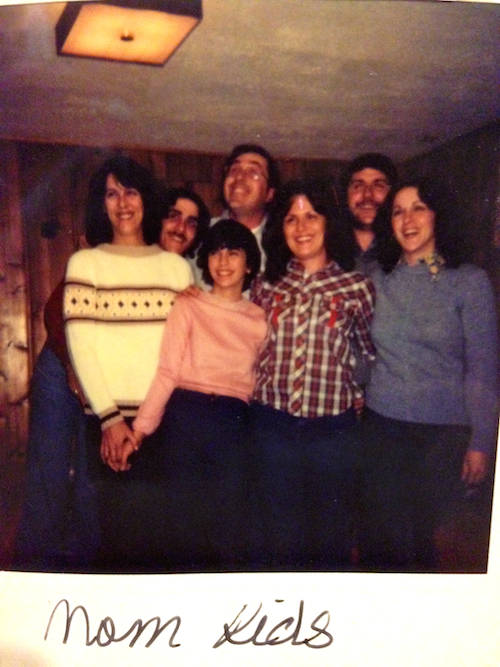 My Uncle George died last night of a heart attack. In that picture up there, a picture of a Polaroid from Christmas 1982, he’s the one with the glasses. My mom scrawled “Mom kids” on the bottom of the picture, in case we forgot who all those people were.

George was my mom’s older brother, older than her and her twin brother, Danny, by thirteen months. Maybe? I can barely remember how old I am anymore, much less my multitude of aunts and uncles.

All I know is that at one point my poor Grammu had four (FOUR) children under the age of five. FOUR! I always attributed this as to why she wasn’t a big fan of groups of loud, noisy children, and why my boisterous cousins and I were often banished to the basement at family gatherings.

My mom’s brothers, my uncles, are hilarious — George, Danny, and Wayne. They each have their own kind of comedic styling — Danny often plays the bumbling fool, Wayne is the acerbic commentator, and George was the eyebrow raising, head-shaking, slightly befuddled judge. He was often the one who got the last word in before the laughter erupted.

It truly was a wonder to behold.

When my parents moved back to Shakopee with my two youngest sisters in tow, Uncle George lived with them and Grammu for a few years. He was a surrogate parent to my sisters while my parents overtimed their way out of poverty.

I’m pretty sure that up until her death my Grandma wore George’s hand-me-down glasses, which was quite comical. His giant glasses on her small face. She liked them and that was that.

A few Christmases ago Uncle George astounded us in a blind taste test by being able to discern the blue M&Ms from all the other M&Ms. We are a family full of the easily amused and astonished. It’s probably why we get along so well.

My mom called at 6:45 a.m. to break the news she was afraid I’d find out on Facebook. Lucky for me I had to go to get up and go to the bathroom at 6:43 a.m. so I wasn’t exactly startled awake by her call. Of course when I heard the special ringtone I have for my parents (“Surrender” by Cheap Trick) my stomach dropped. Whenever my parents’ call I assume it’s death. Today I was right.

She seemed unbelievably clear-headed and matter of fact. She was concerned about when it would be okay to call my Aunt Anna who is in the midst of a two-week vacation in Jamaica. She did not seem to be nearly as impressed as I was by my early-morning ability to recall where Jamaica was geographically and time zonally. She was more relieved that she would be able to call Anna soon.

Chatting with Sister #2 we have discovered that she is good at death and I am not. I lamented forgetting to ask Mom if she needed anything. I didn’t even think to extend an offer of help to my cousin Katie, George’s daughter.

“I’m a sadness zombie at death,” I told her.

My brain is only operating at about 40%. I forgot to drink my coffee until I’d been up for two hours and wondering why my brain wasn’t functioning the way it usually functions.

The grief comes in waves. It’s as though I get distracted for a bit and then my brain is like “Hey, remember Uncle George died?” Then I have to cry for a while because someone I love is dead.

Death in the Facebook age is a new experience. I don’t think I’ve lost anyone I was close to since Facebook ascended to the top of the Internet. If I have, forgive my forgetfulness and blame it on the sadness zombieness of my brain at the moment.

I don’t know if it’s just my pretty connected family or if all families are like this — taking to Facebook to share their grief. My mom & Aunt Anna both posted about the death of their brother, as well as Sister #3 (George was her favorite uncle) and some of my cousins.

And it’s really weird to “like” a post about the death of someone you loved or see so many people liking it. I wish Facebook would adopt the Metafilter thing where people express their electronic condolences with a single, simple period. I don’t know if that started on Metafilter, but that’s where I first saw it, and I always liked it. It’s simple and classy and sometimes the only thing you can do in the face of this kind of news is bear witness because really there are no words to do it justice. There never have been.

Rest in Peace Uncle George. I loved you and you will be missed.