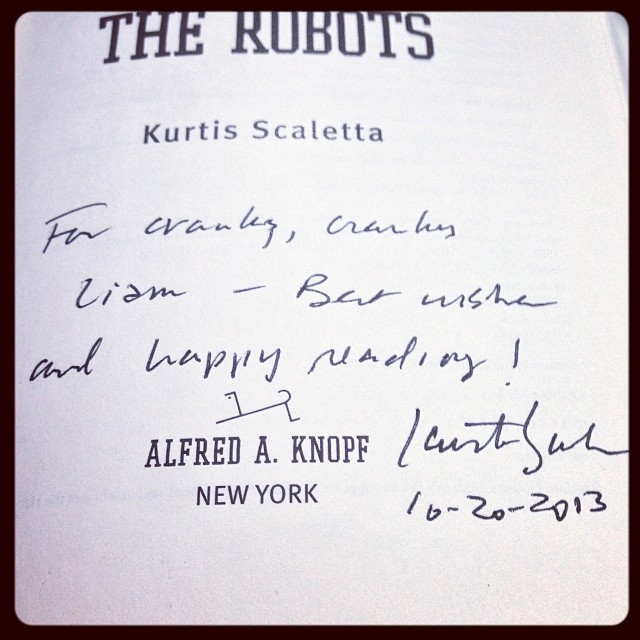 Sleep and I are not on speaking terms lately. The rat bastard had mostly abandoned me for the past two weeks due to lack-of-work anxiety and when it finally came back for a visit, bam my back decided to be a total asshole and thus sleep fled in the face of pain.

Somehow I managed to hurt my back, specifically the left buttcheek area of my back. It sucks, well, ass, and has turned me into a crankier, whinier version of my usual self. And the worst part is that I’m so bored with the cranky, whiny, ouchy version of me I’ve been since Thursday that I don’t even know what to do. During the non-social parts of my day today all I managed to do was fidget, do some stretches, and watch “Don’t Trust the B in Apartment 23.”

After last week’s “My So-Called Life” binge, I’ve decided to indulge in all kinds of one/two-season wonders.

See, I’m watching a crapton of TV because I’ve made it a goal to make my entire family blankets for Christmas. It’s an ungodly amount of mindless work, but I kind of like it because it frees up my actual brain to think about stuff related to The Beast.

As I promised last week, I wasn’t a total bore today. Instead, I ventured forth into the world to see my friend Kurtis read from his new (and very good) book, The Winter of the Robots at the Red Balloon Bookshop. 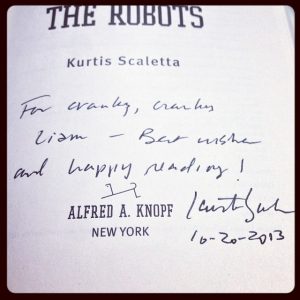 I brought Maxwell and Liam, who was kind of pissed that he had to go. He did not want to go here or there, he did not want to go anywhere. I know this because on the way to St. Paul Max and I offered to drop him off at the Mall of America, the library, the airport, Fort Snelling, and this abandoned-looking school.

When we neared the bookstore he finally shouted that he didn’t want to go because he was shy.
“Uh,” Max said. “You don’t have to get up there and read.”
“I know,” Liam said, full of condescension. “I’ve been to a book reading before. But Jodi knows everyone and she talks to all the people and she introduces me.”

His life is so rough I don’t know how he finds the will to go on.

He perked up a bit when we pulled into Red Balloon and discovered my back right blinker was out. I think he caught the perkiness from Maxwell who was really hoping I’d get pulled over for a malfunctioning blinker. Boys.

The reading was a blast and there were a ton of people there, a nice mix of kids and their grownups. And Kurtis’ three-year-old son stole the show by running behind the table his dad was reading at and waving to the crowd. The kid is adorable and reminds me why three is my most favorite age for kids.

After the reading we met up with Sister #3 and the other Tibbles at Burger Jones. I’ve heard raves about their burgers for years and since Wolfdogg mentioned ordering burgers in Chicago after RiotFest, I’ve been jonesing. It was kind of a disappointment. Since I haven’t eaten beef for like a decade, I’ve become a turkey burger connoisseur.. I can tell when someone’s using pre-made patties, and Burger Jones was. Such a bummer.

Then it was home for the aforementioned fidgeting and stretching and general crankiness.