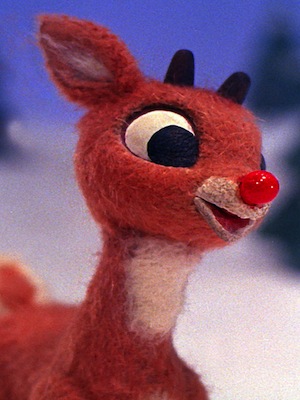 So I was watching the old Rankin & Bass “Rudolph the Red-Nosed Reindeer” special on TV tonight, because of course I did. Though as far as the Rankin & Bass specials go, I have to say “Santa Claus is Coming to Town” is my favorite not only because ol’ Kris Kringle is a ginger and I love them gingies, but also because I think Burgermeister Meisterburger is the best villan name of all time.

When we were kids and we’d sing “Rudolph the Red-Nosed Reindeer” we always added little asides to the song. For instance after the line “they never let poor Rudolph play in any reindeer games” we’d add “LIKE POKER!” It was usually shouted gleefully.

At the end of the song we’d sing “You’ll go down in his-tor-eeeeee” and add “like Jackie Gleasonnnnnnnnn.” This Jackie Gleason was usually accompanied by some jazz hands and lots of vibrato on that drawn-out Gleason.

Then I got to Googling and I can’t seem to find any reference to adding that “like Jackie Gleason” to the end of the song. Is this a Minnesota thing? Like how we play Duck, Duck, Grey Duck and not Duck, Duck, Goose? Or was this purely a University Avenue Elementary thing?

So, darling ones, inquiring minds want to know. Did you add like Jackie Gleason to the end of the song?