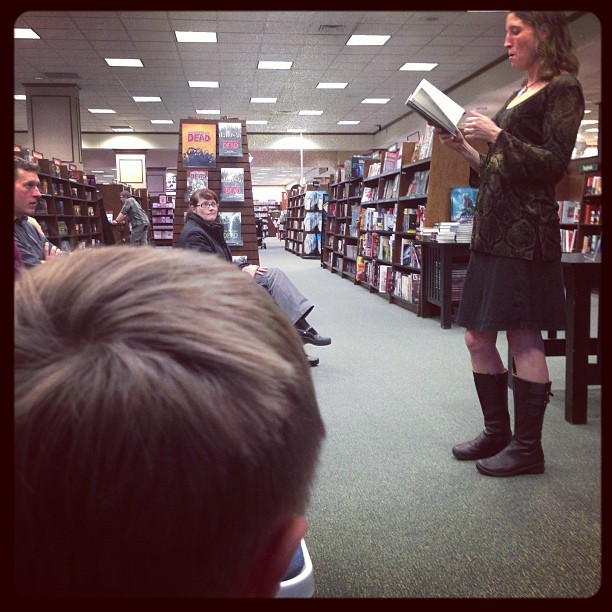 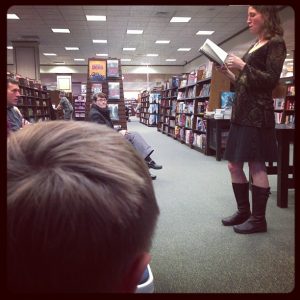 I picked Liam up after school today and we ventured forth to the wilds of Roseville to see Har Mar (Mall) Superstar Kelly Barnhill read from her new book Iron Hearted Violet.

This was his first literary experience. In the beginning he wasn’t too keen on the whole thing, but he was in need of a babysitter and I had plans that could not be cancelled.

“So we’re going to listen to her read a book or something?” he asked, ever skeptical.
“Yes. It’s a book about a princess named Violet and her best friend Demetrius and dragons.”

He sat still and listened pretty well for a seven-year-old who was full of pizza and was super excited to go up by himself to get his book signed.

“She knew I was your nephew,” he said when he came back to show me the signature.
“I told you she was my friend.”
“You have lots of friends who are authors,” he said.
“I know!” I said, much more excited about that than he was.

We sat for awhile and he examined the book. He hissed at me when Steve mentioned he had read about him on the Internet, and he talked with Jeremy, another Black Sheep, about how many chapters there were (seventy-three!).

As the crowd dwindled Liam began to get anxious. “What are we going to do if Nolan or Cade want to read my book?”
“Can you share?” I asked.
“But what if I’m on one page and Nolan’s on a different page because he reads faster than me?”
“Do you want to get your brothers books?”
“Do you think she’ll sign them for Cade and Nolan?”
“I am sure she will.”

As we were leaving Barnes & Noble with our 66 pounds of books Liam announced. “That was way more fun than I thought it was going to be.”
“I told you it would be fun,” I said.
“But you didn’t describe it very well.”
“Sorry.”
“She [Kelly] was really cool. I didn’t know authors would be that cool.”
“She’s pretty awesome.”
“And you know what?”
“What?” I asked as I unlocked Ruby and he climbed in.
“This is actually a pretty good book so far,” he said. “I can’t wait to tell my teacher about it.”