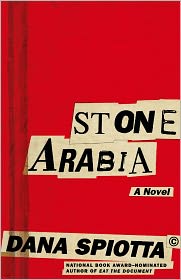 When you tell people you’re spending a majority of your summer reading Rock & Roll novels they immediately tell you to read Stone Arabia by Dana Spiotta. Because it was a Rock & Roll novel written by a woman, I jumped right one it. Plus, Christa reviewed it last year and she liked it.

I can’t say the same thing.

The premise is fascinating — middle-aged LA siblings trudging through life when all their dreams don’t come true. Nik is the wannabe rockstar who gets close to the edge of fame but then plummets into a life of tending bar and creating a faux-autobiography called the “Chronicles” which, well, chronicle the life he could have had. The “Chronicles” are amazing and include fake obituaries, fake reviews, and very real albums that Nik makes in his garage studio.

Denise is his younger sister who instead of losing her life in the wholly imaginary loses it in the hyper-real. She becomes ridiculously obsessed with various news stories — the death of a one-time teen star, SARS, the disappearance of a young Amish girl. She seems to choose these other realities because her life isn’t so great — Nik’s off in his lalaland, mom’s got dementia, Ada, beloved daughter, lives on the east coast with hopes of becoming a filmmaker, and a boyfriend she doesn’t love but can tolerate.

It sounds like a drag, doesn’t it? Well, the novel kind of is too.

The premise is awesome and when Spiotta spends time with Nik’s “Chronicles” or explaining Denise’s obsession with news, the book is exciting and engaging, but these glimmers of goodness are overshadowed by a lot of mundane, slice-of-lifeness: driving around LA, taking care of mom who is losing it, dates with the boyfriend.

Some of the writing here is really beautiful:
[blockquote]”Written words demand the deep attention that spoken words just aren’t entitled to. Writers get to pull something solid out of our relentless, everyday production of verbal mucilage. A writer is a word salvager and scavenger and distiller.”[/blockquote]

But in this case the story behind the beauty doesn’t fully engage. I blame Denise. She’s already given up and just wants to make it through life with the littlest amount of trauma and heartbreak. She seems to want nothing and her lack of desire for something makes the book lack.