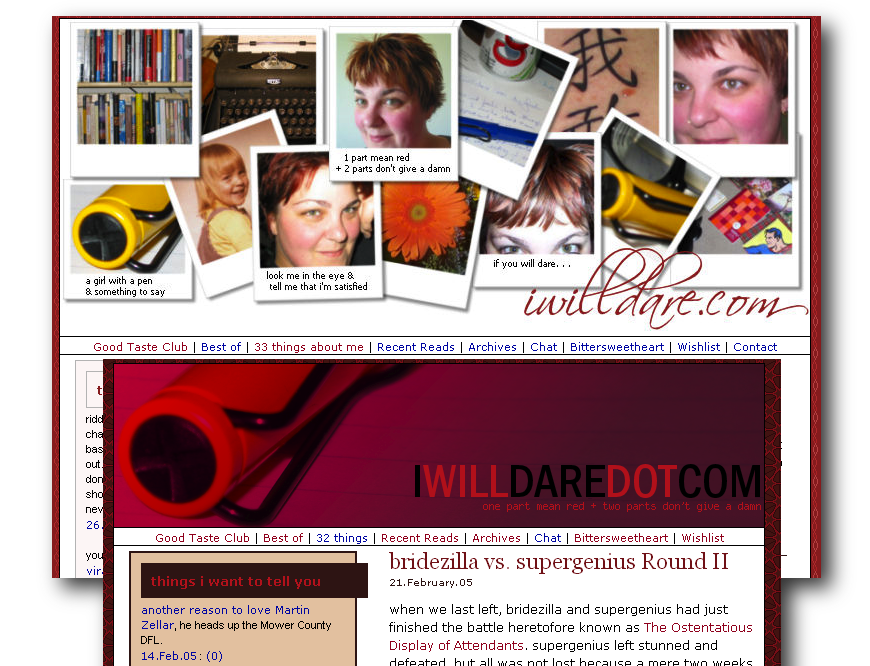 And on this day in the year 2000 a blog was born. It weighed in at 13 words, 0 captial letters, and 1 Replacements’ reference. Two, if you count the blog’s name.

I Will Dare is twelve years old. Later tonight I will take her to K-Mart to get a training bra, some bubble-gum flavored lip gloss, and whatever kind of crap noise the tweens are listening to these days.

Twelve. TWELVE! People I know have gotten married and divorced and married again in the time I’ve been writing here on iwilldare.com.

When I started writing here my niece, Jaycie, was two and in diapers. She’ll be a freshman in September. There were no Tibbles at all.

When I started writing here I was a customer service rep for a small software company who drove a shitty Chrysler something named Clyde, and lived in an even shittier apartment. I had a five-year-old cat named Madison.

When I started writing here I’d post two, three, or four times a day — often about whatever thought crossed my mind or what kind of turkey sandwich I had for lunch. I was twenty-eight and wore my loneliness on my sleeve.

When I started writing here there was no Twitter or Facebook or Comments or even Web 2.0. It was just nerdy people with something to say and a modest amount of HTML knowledge putting words out into the ether positive nobody would ever read them and being A-OK with that.

Instead, I think of that time, back in 2006 when I went out to dinner with Peabo and worried about being practically FORTY! Because at 34, FORTY! was the worst possible thing that could happen to you. Silly girl, FORTY! is for real women.

If you would have told me back in 2000 that not only would I still be writing on this here blog, I’d have laughed in your face. I’m kind of flaky and never expected this hobby to stick. But it has stuck and is probably the best, most impressive thing I’ve ever done in my entire life.

Happy Anniversary to me!