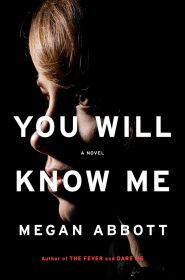 Not much will keep Katie and Eric Knox from helping their fifteen-year-old achieve her Olympic gymnastics dream — not mountains of credit card debt, falling apart cars, or their younger son, maybe not even murder.

Things are going swell for Katie and Eric and their coterie of gymnastic boosters, coaches, and young gymnasts. The gym is doing well and the star, the Knox’s daughter Devon, is on her way to winning double-plus gold elite super on the way to the Olympics status. All she needs to do is stick that landing in the vault at the big competition a few weeks away. But then one of their band of merry gymnastics hangers-on is killed in a mysterious hit and run, and then the claws come out.

There’s wild speculation from the boosters (a group of parents determined to do anything for their competitive daughters), the gymnasts, and the coaches about what could have happened.

Katie’s left to navigate the ever shifting loyalties and boundaries of their ever faltering gymnastics world and she really begins to question what she has sacrificed for Devon’s career? Hobby? and whether or not it is worth it.

You Will Know Me is typical Megan Abbott fair — a group of frenemy teen girls and the adults with slippery morals who support them. At least that’s what I think of as typical Abbott fair. I’ve only read Dare Me, which I wasn’t fan of.

However, in this one, Abbot’s got her ducks in a row and has written a mystery that is less about the actual whodunit and more about the what will they do now, which seems much more satisfying to me, since the whodunit is pretty obvious from the get go. Though, to be fair, she does throw in some wrenches so you question what you think you know and don’t get annoyed when what you thought comes true.

Aside from getting an inside look into the competitive world of gymnastics, which Abbot writes about wonderfully, this is really a story about a mother and what she’s willing to do for her daughter. I liked reading about Katie’s struggles, how she dealt with the mounting evidence that someone she knows may have committed murder, and how this tragedy made her question everything in her life, even the love she had for her husband which had been pretty steadfast up to that point.

What I enjoyed the most about this book is that I really was guessing about what was going to happen right up to the end and when I got there it was really satisfying. I didn’t see it coming, but it didn’t feel like a trick either. Like I said, she sticks the landing on this one.

The new @amandashires & @JasonIsbell song is wonderful and heartbreaking. They’re playing it now on ISO-Lounging and I’ve got goosebumps.

Today’s #DailyWendell song is “Fire” by Waxahatchee because the feels like temp is 85° & I had to turn the AC on. pic.twitter.com/mwlR…