With Sister #4 taking up residence in my spare bedroom (which I used to call Paco’s bedroom because he liked to hang out in there but now he doesn’t because it gets too cat hairy and like I’m gonna clean that shit whenever people come over to stay so now I just keep the door shut) for the next eight days (she’s been here since Saturday), I am beginning to understand the morning habits of some of my writer friends.

I’ve long heard stories of people who would get up at ridiculous o’clocks in the morning to write, at times I’ve only seen on the not-yet-gone-to-bed side of the clock. Wow, I would often think, they’re so dedicated. While they probably are pretty dedicated, my guess is that they live with other people. It’s hard as fuck to write anything with other people lurking about, talking, and demanding they not be treated as furniture or pesky pets that can be shooed away with only the littlest bit of guilt.

But now in the time before the sun has risen and the coffee maker has even started, it’s quiet and nobody is demanding anything. I can see why people dig writing before their house wakes up.

My productive/creative peak is usually from 8 – 11 p.m.. It’s when I create things like this to piss off annoying cousins who are Hallmark philosophers on Facebook. 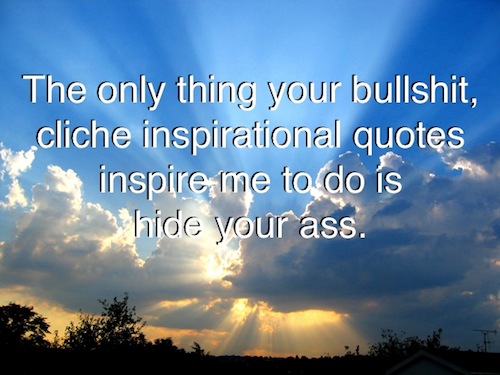 I don’t see me morphing into a strangely productive morning person, mostly because it’s 7:26 a.m. and I’m already wondering if it’s too early to take a nap.