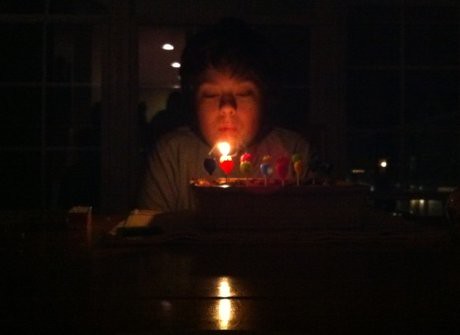 Today is my nephew Maxwell’s birthday. He’s 13 now, and navigating that prickly, hormone-filled line known as adolescence. He’s become the kind of kid who loves Sasquatch, playing Minecraft, Internet memes, and quoting Monty Python. He’s a total nerd, which was never more apparent then when he attended the Overnight Website Challenge back in March.

It’s kind of magical when you watch someone discover their element, and in that event with all those Nerds, Max found his people. I don’t recall ever seeing him happier than he was in that building filled with people who appreciated Nerd Culture as much as he did. He claims the Webchallenge was one of the best days of his life, ranking right up there with his first trip to Disney World.

Maxwell’s birthday is also the anniversary of Luke Bucklin’s death. It’s one of those sad coincidences that you could never pull off in fiction. If you don’t know, Luke was the President and a Co-Founder of The Nerdery, the company that created the Overnight Website Challenge.

On anniversaries* like this, especially the first one, it’s hard not to get mired in the memories. I still remember every moment of that awful week Luke and his sons were missing, and how it made my mom’s cancer feel so small in comparison.

But now it’s a whole year later and to indulge in those memories would be selfish and masochistic. That serves nobody. Instead I celebrated the life of my beloved nephew with my mom whose hair is growing back enough that she doesn’t have to wear a wig anymore.

And as Maxwell unwrapped his nerdy gifts** (a PS3, Monty Python DVDs, some t-shirt about lemons and burning life’s house down), in my head I sang a little bit of “Let it Be” (which is as close as I can come to praying) for Luke and his family and everyone who is remembering him today.

*Poor Maxwell has a total bummer of a birthday because today is also the anniversary of Paul and Sheila Wellstone’s death.

**incidentally, I got Max some of those nerdy gifts but the best gift I gave him was the ride to Best Buy as soon as we finished chewing the birthday cake, where he spent his birthday cash on the new Batman game which is apparently all the rage judging by the reaction from all the Blue Shirts who complimented Maxwell on his game choice.

@TGroman @Wolfdog All I’m saying is obviously she likes us better.