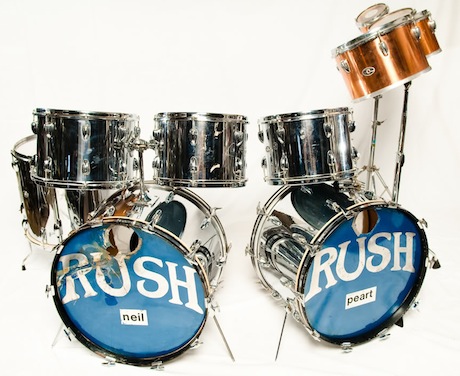 Here is what I know about Neil Peart without Googling: he plays the drums for Rush. Rush may or may not be a Canadian band. They also may or may not have sung a song called Tom Sawyer. Rush has a lot of fans. Many, many rabid fans who get so excited about his drum kit that they started a fan page (or group or whatever Facebook is calling such things this month) dedicated to Chromey that chronicles Chromey’s appearances. Yes, Chromey tours.

That’s one thing that Chromey’s got on this Chromey. I rarely leave the house.

At this point you have probably gathered that being a Chromey, myself, I had to join the group or like the page or circle yes on the note it passed to me in Algebra. As far as I know I’m the only Chromey who is also a fan of Chromey. This makes me disappointed in all the other Chromeys (and there are a crapton of them. I have a gazillion cousins and they all have two kids and those kids have kids).

I can’t remember when I became a fan of Chromey (well the second time, the first time would have been when I was four and asked if I could have it for my last name, which had nothing at all to do with Rush). In fact, I probably liked it and promptly forgot it, such is the way with Facebook likedom.

But today, in the middle of a snowy, dreary Monday I got an email with the subject: “CHROMEY” sent you a message on Facebook. I was all, huh, which one of my doofy (and as you now know disappointing) cousins has taken the singular name for him or herself. But it was not from one of my name-hogging cousins. No, it was a message about some autographed drum heads that were played on Chromey in 1977. Apparently these are going to be up on eBay soon.

The message was so exclamation point riddled and filled with excitement that I got a contact adrenaline rush (rush, ha!). And being an official, card-carrying Westernerd, it makes me happy that there are other nerdy, goofy, rabid fans out there.