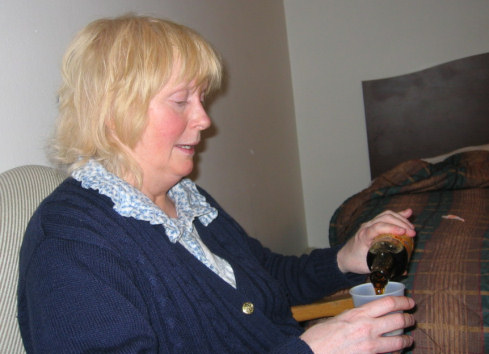 This is Kathy and her inside-out pajamas. she had run out of cans of Budweiser so we gave her a new castle. she poured the beer, took a sip and then proclaimed “It’s like you people are from another planet.”

before i go any further, i just want to say that if i reach 59 and kick even half the ass that Kathy kicks, i will die a happy, happy woman.

from the moment kathy sat down in the dorm, i made it my mission to find out just how old she was. i had to use the sneaky reporter tricks in my bag, but it worked. oh how it worked.

i found out a lot about Kathy, including:
• she was born on mozart’s birthday and loves classical music and opera
• she married a much-younger-than-her man from new zealand, a man she met in a treehouse in georgia
• she currently lives in new zealand with the much-younger-than-her man
• Mr. MYTHM does not know her real age, i do it’s 59 (they’ve been marrried for five years)
• currently the romance is over, though the courtship was quite passionate, now they argue over the grocery bill
• she fully believes she met her husband because she discovered buddhism after watching “What’s Love Got to Do with it.”
• she’s a recovering catholic
• she has two sisters one is a real estate agent the other died at age 50 from MS
• she is a hypochondriac nurse and is afraid to inhale but she really wants to try ‘the ganja’ in brownie and/or cake form
• she thinks Monkey is a handsome young man and was quite upset when i kept referring to him as Monkey (which is his screenname from the westernerd message board)
• she also thinks John Denver is a genius
• she believes that vegetarians lose all their color and spirit because they don’t eat meat
• she’s from chicago but currently resides in NZ
• she loves Van Morrison because some woman kept playing his music as they travelled through the bush in NZ
• she discovered the music of bob marley while scuba diving in mexico
• she used to wear chuck taylors all the time when she was younger and was most enamoured with Geetar’s footwear
• she didn’t swear before she married her husband but now she says fuck a lot
• she thought we were part of the lambda pimpology conference in the parking lot
• she was seriously impressed that i was born on the dali lama’s birthday and is sure that i have some powerful karma working on my behalf and that i will do great things
• she said i could put her picture on the web site, i asked
• she has a slip of paper tucked somewhere in her pajamas that says www.paulwesterberg.com
• she’s a nurse but she doesn’t work as one in NZ because their town does not have a hospital

kathy told me she was in town for two weeks, visiting family. she wasn’t sure what the hell was going on upstairs, and thought all the noise was coming from the lambda pimpology conference in the parking lot. when she discerned that the noise was, in fact, coming from the upstairs, she thought we were playing ‘records.’ she was going to ask up to turn it down, but once she got to our door she realized it was a real guitar and wanted to join in the fun.

and join in she did.

she was really quite interested in our club, as she called it. she wanted to know what we were doing in town and who this paul westerwhatever was. i tried as best i could to explain to her about his music, internet message boards, and things like that, but she didn’t quite get it.

the boys played “Love Untold” for her and we sang along. with kathy shouting out random lyrics after we had sang them “A LOVE UNTOLD” she’d shout. then when we got to the part about “it never came to be so i’m told. does anyone recall the saddest love of all, the one that lets you fall with no one to hold” she said, “oh that’s so sad.” then we did born for me, and she thought that was even sadder.

she went on and on and on, requesting van morrison and no woman no cry by bob marley and anything by john denver. yes, at five in the morning in a hotel in chiago, that was me signing “there’s some coming up i got cakes on the griddle, life ain’t nothing but a funny, funny riddle, thank god i’m a country boy.”

then she went on and on and on some more. she told me about her travels and backpacking through europe, how she didn’t get married until she was 54, about being a nurse and her voracious reading habits.

then she went on and on and on some more and the sun came up.

then she told me about her hiking club and the skiing club and how if i join some clubs and chant the chant from “What’s Love Got to Do With It” i’ll find a husband.

then the sun wasn’t messing around anymore and it was actual daylight. and i had been drinking for more than 12 hours. i crashed, hard, on the bed next wolf, so drunk that i didn’t even think about how i was laying my body down on the bedspread that NEVER EVER GETS WASHED. and then i faked sleeep.

but i faked it anyway. and eventually she left. and we’re probably going to remember Chicago Lodge Kathy for the rest of our lives.

@windowseat @jonmbauer Oh! Maybe that’ll be my next 90s sitcom once I finish Fraiser (my nephew and I watched Dharma & Greg this summer — also did not age well).

@jonmbauer I don’t remember. My guess is all 90s TV hasn’t aged well because of gay jokes & how cultural appropriation is made to look like “woke” diversity.

@jonmbauer Yes. But because we were dumbasses. I love Fraiser, but it is problematic af. The treatment of women, the constant fat-shaming, and oof the entire Maris character is a lot.