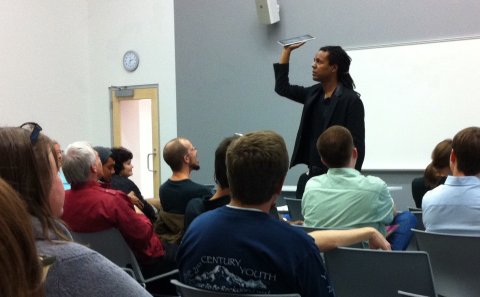 Thankfully, my friend Steve thinks more photographically than I do. If it weren’t for him making an incredulous you have to take a picture of this face accompanied by subtle hand gestures, I’d have missed this photo opp.

What you see here is Colson Whitehead holding is iPad aloft so that we could hear the song “MacArthur Park” (that’s a link to a Glen Campbell version, Whitehead didn’t mention his version just that of Richard Harris and Donna Summer, but I am contractually obligated by the bonds of daughterhood to link the Glen Campbell option whenever possible because my mom didn’t love The Beatles or Elvis, only Glen Campbell).

Last night The Inglorious Bastards, my writing group (or 3/5 of the group), opted to not talk about one of my shitty short stories over tator tots and instead we took in the Colson Whitheard reading at the fantastic Roseville Library (thanks to the Club Book program). The library is huge and beautiful and has not one, but two drive-thrus (one for books and one for Dunn Bros. coffee).

While the library was amazing, it paled in comparison to Whitehead’s reading. At times the audience was laughing so hard some of them were crying. In fact, I was waiting for an older gentlemen near me to pee his pants. Whitehead made a joke about wearing the skin of Saul Bellow (which is creepy out of context but in context was hilarious), and I think that guy stopped breathing for a minute he was laughing so hard.

Because eight years had passed since his last visit to Minnesota, Whitehead gave us a short overview of his career. He talked about how he had always wanted to be a sickly child so he had an excuse not to go out and play. He said being a writer had appealed to him because he stay inside, not wear pants, and not talk to people (AMEN).

Eventually he started working for The Village Voice as an assistant to the books editor and when he finally landed his first writing gig, he was assigned to write about the series finales of “Who’s the Boss” and “Growing Pains.” It was about that time he decided to write a book. This where the song “MacArthur Park” comes in, and how he realizes the lyrics are an allegory for literary rejection.

He also mentioned how being a thin fingers and feminine wrists a lot of people thought he should be a pianist or a doctor, but he wanted none of that nonsense. Then he said there had never been a better time to be a tall, thin black man with thin fingers and feminine wrists, because now we have one in the White House (which got a resounding round of applause from the audience).

After his self introduction he read us a series of satirical essays by imaginary authors from a hypothetical anthology called (I think) “How to Write: Writers write about writing.” (the title of this post comes from a line in one these essays).

It was during this portion of the reading that the audience collectively busted a gut, which kind of amazed me. The jokes/satire were pretty high brow, and Whitehead even said afterwards that he wasn’t sure if this kind of book would have a large audience.

“I mean Raymond Carver jokes?” he asked. “Come on.”

The best part of all? When I went up to get my copy of Sag Harbor signed, he narrowed his eyes at me and said, “Aren’t we Twitter pals?” (remember last summer?)

And I then I peed in my pants.