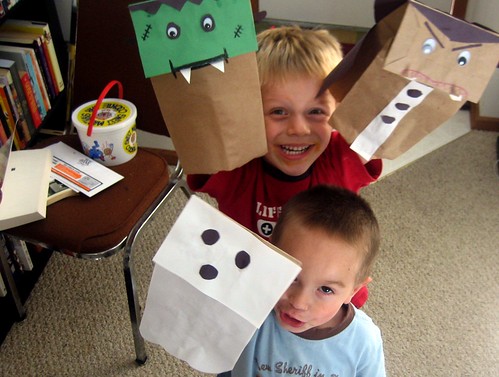 When I went grocery shopping on Monday (that day I had to do two things) I bought a bag of Double-Bubble Halloween gumballs. The gumballs are painted to look either a jack-o-lantern, an eyeball, a vampire, or a planet thing with green lumps.

The Tibbles were obsessed with the “Scary Gum.” This was made all the more amusing by the fact that Liam cannot say “scary gum” without holding his hands up to his chin and shaking his hands while trying to say scary which always comes out as either shitty or share-dy.

We made puppets. Rather I made puppets while Nolan art directed (Liam was at speech class). I am convinced that good old paper and crayons are the best toys you can give a kid no matter how much they scream “me want that, me want that” whenever a commercial for Spike the robotic dinosaur comes on TV (However, me do want that. But I’m a grownup and can appreciate the awesomeness of a robotic dinosaur).
~~~~~~~~~~~~~~~~~~~~~~~~~~~~~~~~~~~~
Over our “fancy” lunch (made so by putting ice cubes in the lemonade), Nolan and I argued. We argue a lot, because I think it’s fun to mess with four-year-old logic. Usually I am the only one amused by the arguments, and that’s all right by me.

“Superman stinks,” Nolan said between bites of salad dripping with French dressing.
“No he doesn’t,” I said.
“Yes he does!” He stabbed at the green peppers.
“Superman’s a great guy, a writer.”
“Batman has a plane,” Nolan said.
“So. Batman voted for Bush in 2000.”
“He did not!” All lunch had been abandoned at this point.
“Yes. He’s a Republican.”
“DON’T SAY THAT!” He whined. “Superman’s a publican.”
“Nope, Supes is part of the liberal media and Batman’s a CEO of a multi-national corporation that probably doesn’t pay its workers very well.”
Nolan bent and sipped at his lemonade from a pink bendy straw. He looked up at me as if he were considering what I had just said and was trying to come up with a logical, reasonable response. “Well,” he said and sighed. “Batman can jump really high and Superman stinks because he never showers.”