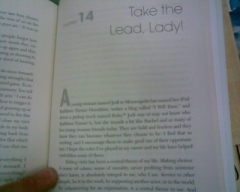 So I got a mention in Kathleen Turner’s memoir Send Yourself Roses. It is by far the weirdest, most random thing to happen to me up to this point.

This morning I got a lovely e-mail from a gentleman named Don who said this:

I’m one of the early reviewers for Kathleen Turner’s new book, Send Yourself Roses. You and your blog are mentioned on page 237. She says:

“A young woman named Jodi in Minneapolis has named her iPod Kathleen Turner Overdrive, writes a blog called “I Will Dare,” and drives a pickup truck named Ruby.” She goes on to talk about her daughter and that you sound like her, and how bold and fearless young women are today. Pretty good book, too.

Later in the morning I was chatting with my pal Wolfdogg who was telling me about being dragged to the Maul of America by his daughters. I told him that while he was there he had to drop into Barnes & Noble and see if it was true or if I was just a victim of the most clever spam to ever happen.

As you can see by the teeny cellphone photo it’s true.

How fucking bizarre is that? I am very, nearly speechless.