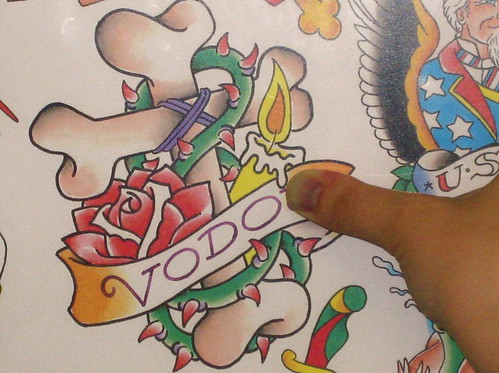 Did you know you’re not supposed to take pictures of the flash at tattoo parlors? They’re afraid that you’re gonna steal the designs and then take them to another shop to get inked. FFJ and I learned this only after I had taken the picture. So if you decide that you too simply must have a Vodo tattoo, please go see the very nice people at the Ink Lab in Minneapolis. They’ll totally hook you up.

Yesterday when I was chatting with The Grad, I told him how unpunk rock I was for planning to go get a tattoo. Not just planning, but making an appointment and going on a Tuesday afternoon. He told me to make sure to spit at people as I left, because that would make me a bit punk rock.

Saul, my cutiepie redhaired tattoer, thought it was pretty tough that I snuck out of work under the guise of an appointment to come and get a tattoo. This is but one of the reasons that I wanted to marry Saul (aside from the cutie red hairedness).

Another reason was that he dug my tattoo, or at least he faked in convincingly. Also, when I spotted the piece of paper taped up that said ‘Ain’t No Holla Back Girl’ and asked Saul if someone was really going to get that as a tattoo, he shook his head a little sadly and said yes. 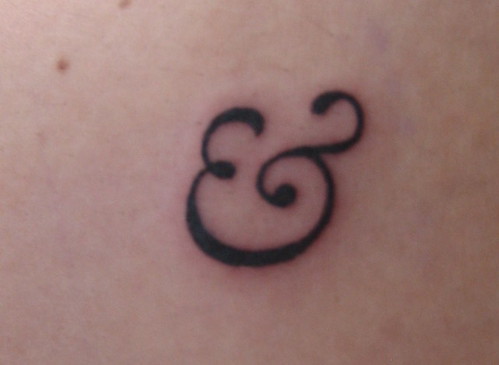 “What font is this?” His head was bent over my arm.
“Caslon,” I said, my head hovering next to his, our foreheads nearly touching.
“I really like the swirls here.” He wiped the ink and blood from my arm.

At that point I think I might have come just a little bit. But I controlled myself because two rooms over, FFJ was about to embark on her own tattoo. And that, my friends, is another story for another time.

Watching “Marching Orders” on Netflix, which is like Cheer but with a marching band. #SpinsterUpdates

Sighs for 1000 years. Yes, men should totally be the ones leading this discussion. #Not twitter.com/ElmhurstColleg…

@chris_steller Let it Be does not have corndogs. Or mini donuts.

@elizmccracken He’s not too shabby.

Today’s #DailyWendell song is “Soak Up the Sun” by Sheryl Crow because COME ON, look at him. pic.twitter.com/4uJQGTDwYU