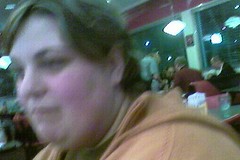 (wolfdogg took this picture, click to see the ‘notes’)

Listen up all you doubters. Yes, all you who do not believe in the power of my Make Sweet Sweet Love to Me™ Vibe. It works! Well, it kind of works. No, I did not convince Mike Doughty to ravish me using the power of my vibe.

I am convinced that it was the power of the Make Sweet Sweet Love to Me vibe that lured el Doughty de las Delectables to the Denny’s in Hudson — where I was partaking in greasy vittles with Wolfdogg and fam.

Yeah, we were sitting there asking the Wolflings what they dug about the Doughty show at UWRF when I saw him walk in with Scrap Livingston and Chuck the soundguy. At about the exact same moment Wolfdogg’s sister said, “Mike Doughty’s here.” I think the entire table let out a collective gasp.

MIKE DOUGHTY WAS AT THE DENNY’S IN HUDSON. god, i hope he ordered the Moons over My Hammy.

See? See that brothers and sisters? That’s the vibe at work. Of all the greasy spoon late-night diners in all the land, he walked into the one I was at (and by all, I mean both the late-night greasy spoon diners in Hudson Wisconsin). If I hadn’t put away the vibe as we were driving off the UWRF campus I’m positive he’d have been eating Moons over My Hammy off my ass.

I was dumbfounded. I immediately picked up my cell phone because I had to tell someone. Wolfdogg said my hands were shaking as I tried to text message Sister #2. It took every single ounce of self-control not to walk over to his table and say something incredibly stupid. Actually, it didn’t take a whole hell of a lot of self-control at all. I would be way too nervous to say anything to him. In fact having him in the same Denny’s so threw me off my game that I never even thought of turning on the Make Sweet Sweet Love to Me vibe.

But, at least I know it’s working. I figure by the time the Basilica Block Party rolls around in July, I’ll have the vibe perfected and Mr. Doughty will be mine!