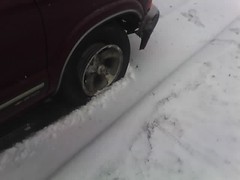 ruby and i had a little bit of an accident this morning. you can see a larger version, if you like. ol’ ruby’s not doing too good. but she seemed to fair a little better than the hill we crashed into: 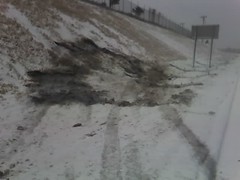 i am still a bit weepy and in shock. my left shoulder hurts where i crashed into the passenger seat. but i am okay. i think i’ve uttered that phrased about 1000 times today. when i called my mom to call a tow truck, when i called the stink to come and pick me up, when i called Al, to tell her i wasn’t coming into work, when i called the insurance guy, when my boss called, when i told my dad.

it all happened so fast. it was raining/slushing/snowing out on my way to work. i was on 212 heading toward EP and instead of taking Eden Prairie Road or Spring Road, which are kinda twisty turny and steep, i thought i’d play it safe and take Pioneer Trail. and just as i was getting close to the flying cloud airport, ruby hit some ice.

i immediately lost control and began careening into the median that divides the highway. now that i think about it, jumping the median and going into oncoming traffic was probably the best thing that happened. if i had gone the other way, i would have went off the cliff and down into the Minnesota River.

as i jumped the median, i knew i was heading into oncoming traffic, i could see the headlights of two cars and as i hit 212 going west (i was originally going east), i have no idea how they missed me.

ruby and i skidded across 212 west and jumped the curb again, coming to rest next to a hill. or kind of next to a hill. i think we were up on the passenger-side wheels for awhile. because i remember being on my side and then flopping back to all four wheels.

i sat there for a minute, ruby still running, Kathleen Turner Overdrive still playing. i didn’t know what to do, so i checked to see if my hands were shaking. somehow the seriousness of my accident would be measured by the shake in my hands.

then i decided it would be a good idea to cry. i called my dad and immediately got his voicemail (he was at the doctor’s). i called my mom and she said her car was in the shop, but she would call AAA so i could get Ruby off the road.

after talking to my mom, i had a good bawl on. i cried for another self-piteous moment and then called the stink (who also works in EP) to see if he could come and get me. he of course did, after i reassured him 20 times that i was okay.

then i called Al to tell her i was gonna miss our 9 a.m. meeting and probably wouldn’t be in at all today.

after i did all that. i just sat there, stunned. and now i’m at home doing pretty much the same thing.

i can feel the tears right there, on the verge. like i could just give into them at any moment. i’m not sure why i still want to cry. maybe it’s because everyone is so amazed that i wasn’t killed. how i missed all that oncoming traffic is a mystery to me. the stink said, “you know this is the kind of car accident that’s fatal when you hit someone else.”

i just keep saying i’m okay. and i think i am.

now, i just sit, rubyless and hoping they don’t total my baby.