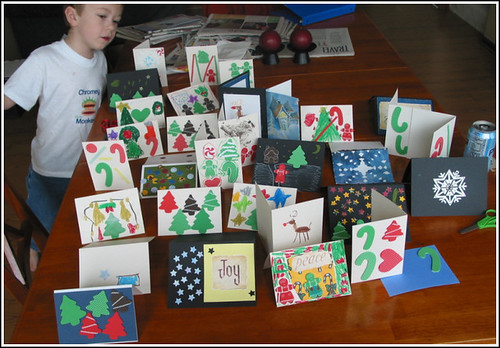 i survived day #2 of a two-day babysitting stint. it was tiring and i feel a little like i to got hit by a truck. as you can see the christmas card making was quite a sucess. we made quite a few cards. max, of course, with the attention span of a flea and an eye towards minimalism kicked me and jaycie’s perfectionist asses.

you can tell his cards, because they’re the ones that seem to all open from the left. my favorite, might be the one with a lone star and a blue square. the square is his blankie. max believes everyone is as in love with his blankie as he is. the other might be the card with the GIANT M on it.

of course, because she is 7 jaycie kept up a running monologue throughout the hour and a half creation process. it went something like this:
“there are two rules in art class,” she started.
“art has no rules,” i said.
“but in art class we can’t run with scissors and when you’re tracing your foot you can’t walk around with your shoe off because there are sharp things all around. what kind of rules do we have?”
“we have no rules.”
“not even no running with scissors?” she asked.
“art has no rules,” i said. “if you want to run with scissors and poke your eye out that’s fine.”
“so it is a rule,” she said.
“there are no rules in art,” i said.
“but i don’t want to poke my eye out,” she said.
“then don’t run with scissors.”
“is it against the rules?” she asked.
“nope,” i said. “there are no rules.”
“well maybe i just won’t run with them anyway.”
“that’s probably a good idea.”

i could also tell you about jonah who chases her around wearing his mean face, or how she never sits in the front of the bus because people will just sit with you and not ask permission, but you know that’d take about 294 years to type.

Today’s #DailyWendell song is “Hell” by Waxahatchee because I’m back on my bullshit. pic.twitter.com/0HMk…