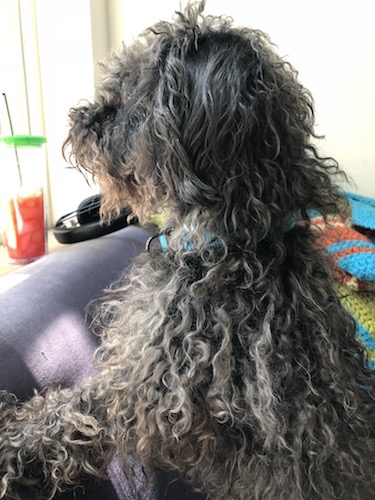 I’d like to introduce you to Sully. Isn’t he a good boy? Doesn’t he have the best name? I gave it to him. I lobbied hard for Murray, but Sully won. I call him Sulz or Sulzburger. To be fair, I often call Walter Pooty Pie or Mr. Peanut Buddy.

Don’t get too excited, he doesn’t belong to me. He’s a new member of Sister #2’s family. My nephew, Maxwell, and his friends found Sully abandoned in the empty lot next to Home Depot at like 3 a.m. one night a few weeks ago.

Though we posted Sully’s picture everywhere, nobody claimed him. When they took him to the vet he wasn’t microchipped. The vet said from the looks of him he’d been on the street for awhile.

If I think about it too much it makes me want to cry. How could anyone abandon such a good boy? He listens when tell him to stay. He rolls over. He sits. He’s super affectionate.

Walter & Sully are here for the weekend. I’ve been singing Counting Crow’s “Sullivan Street” on repeat all day. Sully’s name has nothing to do with the song, and everything to do with “Monsters, Inc.”