I’ve read every review of Hari Kunzru’s White Tears that I can find. ALL of them — Goodreads, Amazon, Kirkus, you name it, I’ve read it. It’s interesting that in a majority of the reviews the reviewer spends most of their words on the musical and cultural appropriation portions of the book and not so many on the hard, confusing left turn the book takes about two-thirds into the story.

Sure, I can kind of understand why. The story of two white guys who move to Brooklyn and become connoisseurs of the blues is easy to grasp. It’s easy to explain and to critique. I mean, after all, Carter the trustafarian who bankrolls a recording studio with his nerdy, not-entirely stable friend Seth, has whiteboy dreads. Shudder.

However, once this book took a turn toward the supernatural murder mystery I was puzzled roughly 90% of the time I was reading. Nothing made sense or added up and I was wholly confused by just what in the hell was going on. After Carter runs into some trouble, Seth and Carter’s beautiful artist sister, Leonie, take a road trip to the deep south in search of Charlie Shaw’s descendants. See, Seth is convinced that the blues song he and Carter released from some found recordings Seth had done around NYC were haunting them.

The road trip goes really, really poorly and a bunch of weirdness unfolds. At one point Seth is accused of a crime and while being interrogated he maybe travels through time to the Jim Crow south as a black man who was a accused of murdering a white woman. Or maybe it’s a hallucination? Or maybe he’s possessed by the ghost of Charlie Shaw? Or maybe I have no fucking idea what in the hell was going on? I really don’t know. Still. 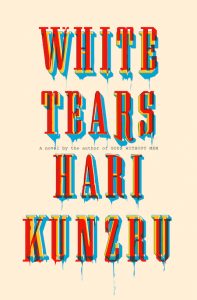 The book makes some great points about the cultural appropriation of the blues and the mass incarceration of black men, but so many of the cogent arguments are lost in this confusing supernatural elements. Plus, Kunzru goes out of his way to make sure the readers knows that both Carter and Seth aren’t the most mentally stable people thus adding another layer of wtf-ness to an already confusing story.

On the surface this book tickles all my readerly sweet spots but in the end it just frustrated me because I didn’t understand half of what was going on.

Today’s #DailyWendell song is “Ride” by Dessa because my brain said so. pic.twitter.com/YrT6MFC5ko

@Ericka @BarackObama I totally get it now.

@Ericka If I ever win a Grammy I’m going to very specifically not thank you.