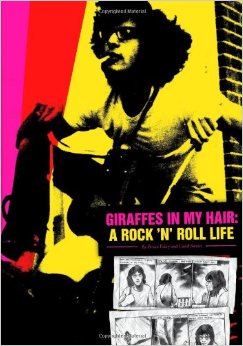 This is more of a warning than a review. Don’t be fooled when you see the words ‘A Rock ‘N’ Roll Life’ on the cover of a graphic novel and think, “Hot damn! This is not just in my wheelhouse, it is my wheelhouse.”

I made that mistake so you don’t have to.

Bruce Paley read Jack Kerouac’s On the Road (Ugh. Barf.) and really dug it. And since Paley was a late-teen in the late sixties, he decides to hitchhike around and be all peace, love, and rock & roll. Then he decided to write a really boring book about his “escapades” and have it smudgily illustrated and, well, it’s just a heaping helping of who cares.

The book is broken into chapters each one an episode from Paley’s “adventures” (those quotes are super sarcastic). A few of the chapters relate to each other, but it’s rare. Mostly these “adventures” go something like this: “and then this one time, we drove to someplace and the cops pulled us over and ALMOST found our drugs, but they didn’t.”

“And this one time I had sex with three different women on three consecutive nights when I was in New Orleans and none of the relationships lasted.”

“And this one time we stole a watermelon and had to go to jail for the night, but then we all got out the next day and had to a pay fine.”

“And this one time we got a ride with a bunch of Black Panthers in Chicago right before the 1968 Democratic convention, but we got the hell out there before you know, history took place.”

Maybe if you know Paley, and are a close personal friend, you’d really dig this book, like a really good friend and kind of obliged to like the thing your friend made. Really, this is filled with anecdotes that you wouldn’t even want to listen to over beer and tator tots. It’s that boring. There seems to be no cultural significance. The Rock & Roll promised on the cover is not that apparent (unless, I guess, developing a heroin addiction in the mid-to-late 70s is rock & roll?) and really this is one big bummer of a book.

It’s one of those that is so crappy you finish it just to prove to the crappy book that it will not beat you.