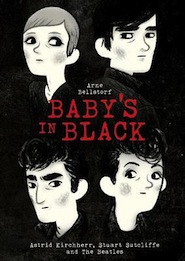 In the epic battle of The Beatles vs. The Stones, I come down firmly in The Stones camp. That doesn’t mean, however, that I don’t also love The Beatles. In fact, I’d say The Beatles were the soundtrack to my 19th year. That’s not how I old I was when Beatlemania hit US shores. No, it was 1991 and I had discovered old Beatles’ records at the Chippewa Falls Library. I played The Beatles so often the winter of 1991 that one of my younger sisters still loathes their music to this day.

Even with that small-scale Beatlemania, much of what I knew about the band is the kind of information you get from pop culture osmosis. The kinds of facts you’re not sure how you learned, but know nonetheless. From Liverpool, played in Hamburg, screaming girls on Ed Sullivan, Maharishi, Yoko, Lennon shot in 1980. . . that kind of stuff. Also, who hasn’t heard about the mysterious “fifth Beatle?”

If you read Baby’s in Black the fabulous graphic novel by by Arne Bellstorf, you’ll learn all about one of the candidates for fifth Beatlesdom, Stuart Sutcliffe and the time The Beatles spent in Hamburg.

For real Beatlemaniacs this book might be old hat, but for me it was a revelation. I knew nothing of Stuart Sutcliffe, the brooding artsy Beatle who falls in love with a German art student Astrid Kirchherr.

The book focuses on Astrid and Stu’s relationship and how despite a language barrier, they fall in love. It’s really sweet. Astrid’s pretty rad. She’s a photographer who hangs with all kinds of artists and convinces Stuart to go to art school in Hamburg. She’s the woman who took those early Beatles’ photos where they all have Elvis-y pompadours, before they adopted the mop-top look that was popular with the Hamburg artsy crowd.

As Astrid and Stu’s love grows he has to make a choice between the woman he loves and the band. As you know he didn’t choose The Beatles. If you’re already familiar with this story you know how it ends. I had no idea. After finishing the book I proclaimed, “that’s the saddest fucking thing I ever read.”

It is and it’s good. Baby’s in Black is one of those great books that are engrossing and entertaining while being totally educational at the same time.