First of all, even though I don’t believe in TV Spoiler Alerts, consider yourself warned. I’mma talk about “Mad Men” and the finale for a bit and if you don’t want things ruined stop reading this and go read a book.

In a move that is rare for me, I discovered “Mad Men” before it became a huge cultural phenomenon. And by discovered I mean one of my Loft writing classmates nagged me incessantly to watch it because he was convinced I would love it since I was a copywriter and it was about advertising (Thanks for that W.M.G.).

Of course I loved it instantly. I continued to love it because in the form of Peggy Olson I found my spirit fictional character. Yes, our lives & careers were some forty-years apart, but we still had a hell of a lot in common.

She was a copywriter and I was a copywriter. We both worked in a companies filled with men who ignored our intelligence, undermined our talent, and generally thought we were pointless because they didn’t find us attractive (I mean come on, Elizabeth Moss is beautiful but the show is trying to play Peggy as ugly duckling compared to Joan Harris’ swan). We had complicated relationships with our male bosses.

Peggy’s storyline resonated with me more than any other TV character ever in the history of all the TV I’ve ever watched. I knew her creative triumphs, her professional frustration, how she had to work twice as hard as everyone else to get her voice heard, how her dumb fucking boss just took her for granted, and the peculiar loneliness of a woman who cannot figure out love so instead fills herself with work.

I got it. Probably too much. 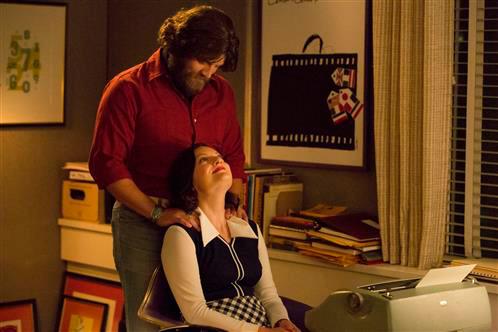 So then last night on the very last episode, Peggy got some happily ever after and I sat on my couch and ugly cried my fucking face off because dammit one of us should get that bullshit, right?

I know the meet cute way it happened was super bullshit and against the whole ethos of the show. And I read all the bitching about how Peggy stood for not needing a man and Peggy was symbolic of making your way in business as a woman and all that blah, blah, blah, but you know what? Fuck you. Because sometimes you can not need a man, but want a man. And you know what else? You can be very successful in your chosen career and still want a man.

And even more than that — more than my own pathetic wish fulfillment and fanfic fantasies come true — I like that Mad Men did what was unexpected.

Now beautiful, buxom Joanie could have ended up with her billionaire beau and nobody would have blinked an eye. Because of course a woman like Joan would end up with a man. And again, nobody would have batted an eyelash if Peggy had ended up alone . . . smoking, hungover, empowered badass Peggy without a man but she has a career. Because apparently in the fictional world a woman can only be those things if she is single? And I wonder how many women who have written these think pieces wringing their hands about how awful it was for Weiner to this to Peggy have actually been single for a large portion of their adult lives. Because sometimes it’s really fucking hard to be empowered and badass when you are all alone.

So yeah, Peggy got her career and her man. Joan got her business and her independence. And a bunch of super jaded cynics got all pissy because they’re idea of feminism and empowerment is very, very narrow.

Not me though. This jaded cynic loved the shit out of the ending because I like when my favorite characters get what they want.