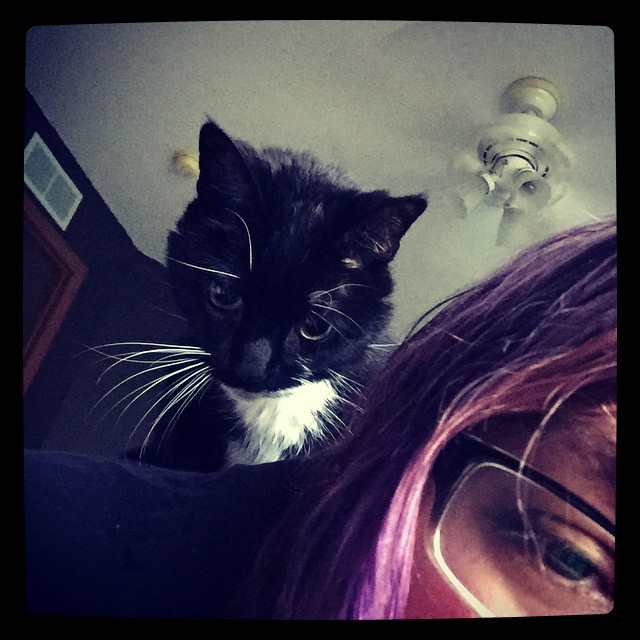 Pictured: Me & Paco 12 minutes before I was to meet BFK for dinner. Not pictured: my pantslesssness while looking out the window & listening to Station Eleven by Emily St. John Mandel & contemplating how long it will take me to get to the pho place.

Last night I met BFK for dinner at the local pho place in Shakopee. Can I just say how much I love having one of my best friends living in the same small town I do? It’s why I can lay pantsless in bed until 12 minutes before we were supposed to meet and still only be a minute late which was totally not my fault, but the light at Canterbury and 17 being ridiculously long, so long that I watched BFK scootch by because she got to turn right and I had to wait for the stupid light.

Anyway, I’ve only recently discovered the wonder that is pho and banh mi and as is my way I’m pretty obsessed with it. If I had the money I’d go there every night and try something different. And really, I should say if I had the energy and desire to put on pants every night I’d go there because it’s cheap as hell. Last night BFK I ate for $10 each and that included a generous tip.

It’s the kind of place tucked behind a gas station, across the street from the horse track, in the same strip mall as the pawn shop. What it lacks in glamour it makes up for in flavor.

So there we were in this divey place with wonderful food on a Monday night, BFK regaling me with tales from her Labor Day weekend, last week when both of her kids were incapacitated (one due to knee surgery, the other due to a broken foot), and the latest gossip about Lacrosse. BFK is the Buddy Garrity of Shakopee Lacrosse, a title she accepts with a sort of grace that comes from not really getting the reference but not minding it because it makes Sister #2 and I laugh and laugh. Also, it helps that we love her and would never hurt her on purpose.

As BFK repeatedly breathes in the soup and sucks down jalapeños in an attempt to loosen the grip a cold and/or allergies has on her sinuses, I watch a curious collection of men gather at table in the back.

It starts with two men, in their late twenties or early thirties. They sit at the end of a long table, one meant for ten or twelve. Since it’s 8 p.m. on a Monday in Shakopee, MN I don’t think much of it. Dudes need space, I guess.

Slowly the table begins to fill with more and more men. They are mostly white, casually dressed, short-haired nondescript dudes. If you were to conjure a white, early-thirty-something guy who works in a cube farm somewhere, these were the guys who would show up. There is one who stands out a bit because he’s wearing a silvery grey shirt and kind of looks like Wash from “Firefly”. Also there is one Asian dude who joins the table that has swelled to fourteen. He is wearing a hat, a t-shirt, and shorts. He’s the only deviation from the whiteness and business casualness. Also he stood outside and smoked before he joined the group.

I was mesmerized by the gathering and tried to puzzle out what brought them together for pho at 8:30 on a Monday night in Shakopee. It was obvious they were all buddies by the way they greeted each one as they joined the table. It was also obvious they were regulars of the restaurant. I studied them. Hard. I couldn’t see any wedding rings, and I also couldn’t hear anything they were saying.

Because we’ve been friends for so long BFK understands that sometimes I am rude, easily distracted, and generally boorish.

“So there are like fourteen guys sitting back there and I can’t figure out what their deal is,” I said.

She shrugged at me.

“They know I’m studying them because they’re doing the ‘that lady is staring at us, no don’t all look at once, you. Okay. You. Okay. Now you. Thing.'”

At that BFK glanced over her shoulder as one guy turned back from looking at me and the dude next to him turned to stare at our table.

“They are!” she said, turned red, and laughed.
“Yeah, I know. I’ve been watching them. I can’t figure it out. Divorced men support group?”

She looked at the table again, studied them for a minute, and turned back to me. “Poker buddies.”
And I think I heard an audible ding as she said it.
“They probably go to Canterbury after work and then come here for dinner,” she said
“God, you’re good.” I said.
“Except for the hipster in the hat. He works from home.”