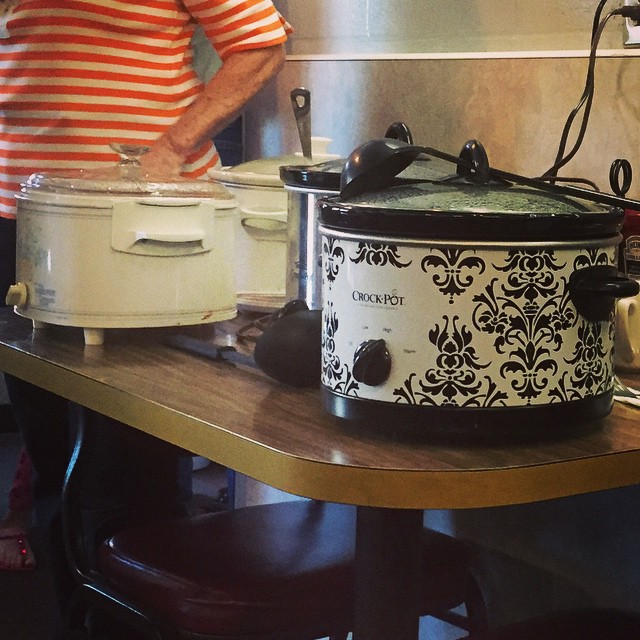 When you’re an Angry Hermit one of most dreadful things that can happen to you is a family reunion. They are awful. Not only are they built for small talk (the worst) they are situations where awkward encounters are not just possible but imminent (the worst of the worst).

Yesterday we gathered at my parents’ tiny diner in Savage and celebrated the 90th (or 90somethingth) birthday of Aunt Jeannie, who is the last remaining sibling of my Grandpa Cub. It might be 97th. I’m not entirely sure because this fete was dreamed up and organized by people who are not social media savvy and the only invites came via phone or word of mouth. It was mostly a gathering of my mom’s cousins on the St. Martin side and their kids. These are people who all look vaguely familiar from a picnic I went to back in 1995.

At one point my cousin Billy arrived, and Sister #2 shot out of her chair to shout, “Billy! Billy we’re over here. It’s Billy. I know him!” Successfully getting Billy’s attention and making an “Elf” joke at the same time. She’s efficient.

“I never got an invite,” Billy said as he sat down. “I just happened to talk to your mom and she told me about it.”
“That’s how everyone got invited,” Sister #2 said.
“It was old-fashioned,” I said. “Word of mouth and telephone.”

Then we collectively shuddered in horror as I sent them Ello invites from my phone.

After hitting my quota for saying “I’m Jodi, Diane’s oldest, Cub’s daughter.” Maxwell and I escaped so he could get ready for Homecoming and I could await the arrival of Ray. RAY!

We’ve known Ray for 22 years, now, and he came up from Madison to see Sister #2 and Ben before they move to Portland (barf). I adore Ray because whenever we see him it’s like no time has passed, even though it’s been a few years. I also adore Ray because even after we do all the reminiscing and gossiping about the people we know there’s still more we talk about. Also, he introduced me to The Weakerthans a million billion years ago and how can you not adore that person?

Last night while Sister #2 and Ben ferried children to different Homecoming picture-taking opportunities, Ray and I reminisced about music. I talked about how Pearl Jam’s “Vs” puts me right smack dab into the fall of 1993 and he said how he couldn’t get back to Pearl Jam no matter how hard he tried.

Then he dropped this line on me because apparently he wanted to make sure the depths of my adoration knows no bounds.

“Whenever I finish reading your blog I always have to go listen to Liz Phair.

That’s when I died of happiness. I am dead now, writing to you from the beyond the grave. Spooky.