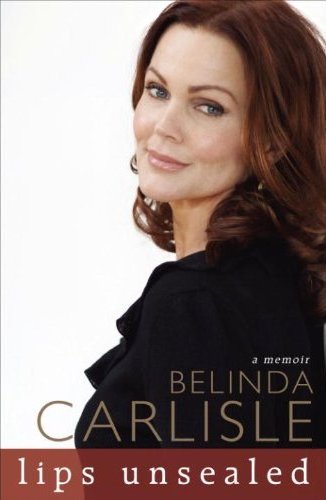 My rosy feelings for Belinda Carlisle’s memoir Lips Unsealed come from equal parts twenty-five-year-old nostalgia and love for Christa’s review of the book. Her review is one of my favorite pieces ever published on MN Reads. It’s everything I love in a review: book description, clear opinion, personal connection, and good writing.

Belinda’s book is not everything I love in a music memoir. Probably because it’s more addiction & recovery memoir with a touch of music, which now that I’ve read the book makes sense. Though she loves music, Belinda left all the songwriting to other people. She was divorced from the creative process, leaving that to her bandmates in The Go-Go’s and to record producers. She showed up to give voice to the songs and a beautiful image to the videos.

That’s not to say there is no music at all. She charts the start of The Go-Go’s from punk scene darlings to chart topping groundbreakers. Did you know The Go-Go’s were the first all-female band who played their own instruments and wrote their own songs to land a #1 album on the Billboard charts? I didn’t until I read the book.

She chronicles the excesses of their partying, the bitterness of their many break-ups and reunions (jealousy, drugs, etc.), and of the guilt she felt being the break-out star whose solo career actually goes some place. There’s some sex, a lot of drugs, and a little rock & roll. There are anecdotes about people you’ve probably heard of and tales from her childhood, but mostly there’s just a lot of shame and drug use.

Not all of the shame stems from her constant need to be high, a lot of it stems from her body image. This broke my heart. She was picked on for being a fat kid in school and, well, throughout her career. Reviewers often commented on her weight, which had nothing to do with her actual performance. She talks about constantly comparing herself to Madonna and wanting to look like her.

This was super jarring. There was a time in the 1980s where Belinda Carlisle was the most beautiful woman in the whole world. At least she was in the girl world I grew up in. Just look at her!

And to learn that she wanted to look like Madonna, just felt wrong somehow. While we loved us some Madonna, I don’t think any of us actually wanted to look like her. Belinda though. . . Belinda’s beauty seemed accessible to a gaggle of girls in suburban Minneapolis. Belinda had the kind of beauty aspired to and could maybe actually achieve. Even in our bedroom dance parties we knew Madonna was unattainable.

Yeah, I know, this has little to do with the book. I have little to think about the book. It was oddly disappointing. Addiction memoirs are not my thing. They have the “if you read one, you read them all” feel to them. They all read sort of like this: here are the myriad shitty things I did to get drugs and the other shitty things I did to hide my need for them. Here’s how I finally saw the light and what I do now to stay clean.

Boring. While I don’t begrudge her the need to share her story (or anyone who suffers from addiction), it doesn’t really make it that interesting. While I’m glad I read Carlisle’s memoir, it’s more because I’m on a rock & roll reading kick. Really, Christa’s review is better than the book.

And, if you’re interested here’s how the Women in Rock Memoir/Biography Ranking sits: