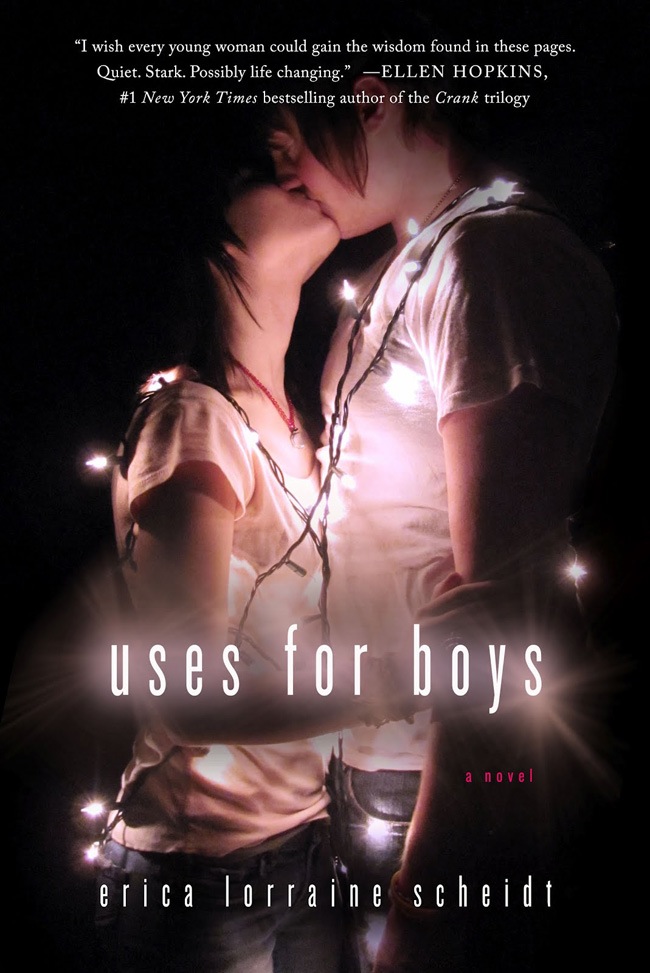 There’s a lot to say about Erica Lorraine Scheidt’s wonderful young-adult novel Uses for Boys, I hope I can get to them all. Where to begin?

First of all, this book came to my attention on Twitter when some of my very favorite people & writers were all “USES FOR BOYS HOLY SHIT!” and “USES FOR BOYS, FOR REAL PEOPLE!” Usually I’m a little leery of YA recs that come via Twitter. YA writers are a loyal pack and I’ve been burned by their ability to put loyalty over critical thinking. This one, however, intrigued me because it’s gotten undies all bunched because of the sex included in the story.

Make no mistake though, this is not a book about sex. This is a story about a lonely sixteen-year-old girl trying to find her way through the world without any guidance.

Anna’s got a stark, sad voice that is incessantly searching. She’s the only daughter of a woman who is keen on finding and keeping men. Anna’s mom is really good at finding, not so much with the keeping. This singular quest leaves Anna to raise herself and she’s not very good at it. Anna spends her time rambling around the big house her mom got in a recent divorce, eating cereal, wondering what to do with herself. This is when she discovers the many uses for boys.

Some of the uses for boys Anna discovers: loving, experimenting, sexing, hurting you against your will, using you, using them, ill-conceived attempts of making you feel better about yourself, getting you where you want to go, stepping stones to something better, making you feel less alone.

The entire time I read Uses for Boys, which wasn’t very long because this is one of those where 60 pages passes before you even blink, much like Marcy Dermansky’s Bad Marie, I had a line from Liz Phair’s song “Jealousy” stuck in my head.

In the song Phair sings, “Just putting your body wherever it seemed like a good idea.” This seems to fit Anna too. Sometimes her body is placed in proximity to boys who just want a body regardless what the owner of that body wants. Sometimes the body is placed next to someone who genuinely cares for Anna. She has a hard time dealing with all these situations, though eventually she realizes that maybe some of the places she wants to put her body aren’t such a good idea.

Much is made about the sex in this book — not by most of the characters — but by readers and reviewers. The sex reads real, the way sex actually happens between human beings. It’s not soft-focused, perfumed, heaving bosoms, and it’s often far from romantic. There is, however, romance, it just doesn’t come from where you expect it.

Toy, Anna’s best friend, is all flights of whimsy and romance, and tales of boys who treat her well and love her so much. It’s a direct contrast to Anna’s experiences thus far, and Anna spends a lot of time puzzling out why and trying to put a spin on her life so she it will match Toy’s.

And then there is Sam, a good kid from a good family. Anna’s glimpse into Sam’s family life is oozing romance. She wants what he has so badly it’s palpable and her longing is tinged with so much sadness that at times reading it was unbearable. Like my body and heart felt actually heavy.

The book is not perfect. I had some problems about money and how Anna always seemed to have enough of it or no worries about it even though she was living on her own at a young age. But these were minor quibbles. Anna’s voice is strong and the book moves so quickly those things were easy to dimiss in the race to get to the end to see how Anna would fare. Despite her detachment from her own life, it’s easy to get attached to Anna and really hope she lands on her feet. The ending here, is really spot on, which I admire more the older I get. Endings are hard and it’s not often an author can totally stick the landing. Echeidt does with a nice mixture of hope and open-endedness. Nice work.