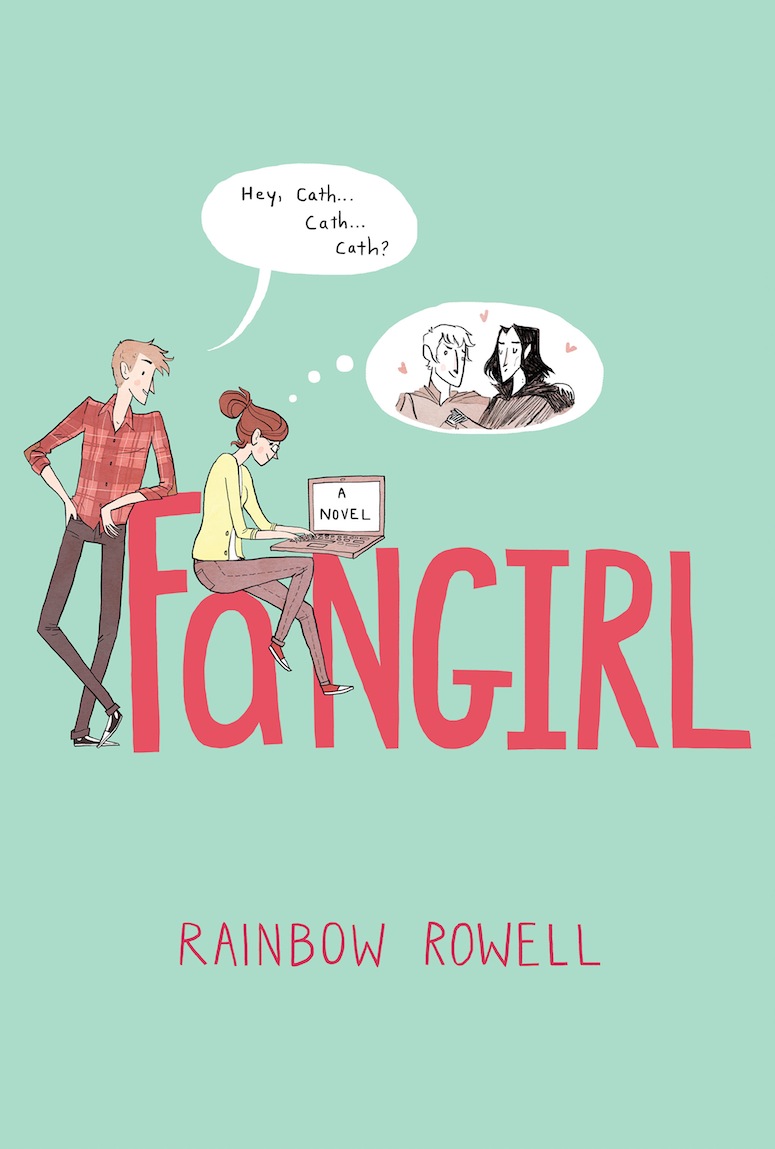 Wow, is Rainbow Rowell’s Fangirl kind of a disappointing, too-long mess. It’s shocking because Eleanor & Park is such a beautiful, poignant book, and this is the opposite of that.

Cath, our protagonist is a freshman at the University of Nebraska in Lincoln. Her twin sister Wren has decided that they need a trial separation. So Wren is off in another dorm partying it up with her roommate, while Cath is left with a sort of brusk roommate who is in and out of the room a lot, often accompanied by tall, rangy Levi who likes to eat Cath’s protein bars. Another thing you should know about Cath is that she’s the writer behind wildly-popular Simon Snow fanfiction. Simon Snow is a Harry-Potteresque character. There are Mages and wands and successful movie adaptations in his thirteen-book series.

Fangirl follows Cath through her first year of college — how she struggles to fit in, navigate a world with a roommate who is not her sister, and the various academic hurdles she must clear while keeping up with her fanfiction story.

This one is a snoozer, which is kind of surprising considering Rowell throws every college-aged drama you can think of at Cath: a strange roommate, mental illness, alcoholism, learning disabilities, plagiarism, and the return of an absentee parent. It’s too much and not enough all at the same time. Each of these issues is enough to build an entire book upon, and yet they are glossed over and quickly resolved here.

And then there is the fandom, something that we know is really, very important to Cath but as a reader you never actually understand why. She doesn’t tell us. It’s not apparent in the book, it just is. It’s kind of a gaping hole in a book called Fangirl. Maybe it’s supposed to be a sort of shortcut description of Cath’s personality. “Oh, she’s a fangirl.” Maybe that descriptor means something to a certain segment of people, a segment I don’t belong to.

But the biggest problem with Fangirl is that there is nothing at stake for Cath. The biggest dilemma she faces is outing her fangirlism to the boy she kind of likes. It’s not a matter of coming of age, realizing that there is more to life than Simon Snow. It’s not about the dichotomy of having a rich online life (from what I can tell there isn’t a tight-knit fanfic community here, though she does mention replying to comments) when your offline life is kind of a bummer. It’s frankly just a slice of life about a girl bumbling through her first year of college.

All the problems that come up — the alcoholism, the estrangement from her sister, the mental illness, the learning disabilities, the plagiarism — are all dealt with quickly, efficiently and in a way that leaves Cath unscathed. It’s so disappointing.

And Cath? Cath is just kind of an icky character. She’s super judgmental and a prude (refusing to kiss the boy she’s been dating for three weeks because kissing means something to her). She consistently refers to her dad, who is suffering with some sort of bi-polar disorder, as crazy, and she tsk-tsks everything her sister does.