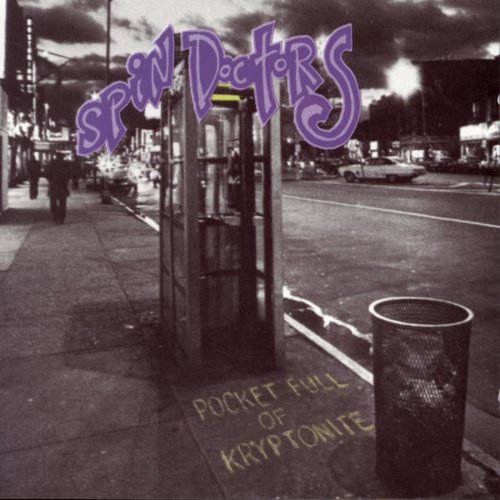 As I said on Facebook, my friend Steve tricked me into playing one of his dirty Facebook games. In this one your friend gives you a year and then you list the 10 best albums from that year. Steve got 1993 and left Liz Phair’s “Exile in Guyville” off the list. Of course I had to say something.

He then gave me the year 1991. Because I am a rebel, I made my own rules and listed albums that I’m pretty sure I listened to and enjoyed in 1991 — not the greatest albums released in 1991 or the albums I loved the most from 1991, these are albums I actually listened to in actual 1991.

For the most part I am not embarrassed by any music I’ve ever loved at any point in my life. We’re humans we change. Also, I’m sentimental about music and I love certain songs/bands/records regardless of goodness/badness because of the memories they conjure up.

Now, for the past 22 years I have claimed true love for the Spin Doctors even though “Pocket Full of Kryptonite” is generally recognized as one of the worst things to happen to the 90s. I remember back in college arguing with my friend Chuck about how the album was good and “Jimmy Olsen’s Blues” was a great, great song. And to counter he’d just sing a few lines from “What Time is It?“. I never had a good comeback.

Well today, thanks to getting stuck in 1991, I listened to “Pocket Full of Kryptonite.” It is awful. It is beyond awful. Most of the songs are unlistenable. There were more than a few that I had to skip after less than a minute. And the lyrics? “You never loved your frozen freight. Perishables and bloodless meat. You rolling snowball soul of sleet. You never wait.” — From “Refrigerator Car.” Yuck.

The other one from my list that was tough to get through: “Fear” by Toad the Wet Sprocket. It sounds a little too precious, though musically I can hear things in it that I went on to really love in bands like The Decemberists or Netural Milk Hotel. [Musicgeeks everywhere are falling off their chairs because I just mentioned these bands together.]

I put this list together pretty quickly and without much thought. Allegedly, I had many productive things to do today. Truthfully, I spent all day thinking about, listening to, and talking about this list. The more I think about it, the more I really love it.

1991 was a transition year for me. I started college in January (a semester later than I had planned) after a ridiculous struggle with finances and parents who knew absolutely nothing about what it took to actually get to college. It was a brutal year in ways I don’t feel like explaining right now, but it was probably one of those years where I started to become the person I am now. This list of albums really reflects that.
[circle_list]

@Anneflo The Vanishing Half by Britt Bennett. It’s SO good!