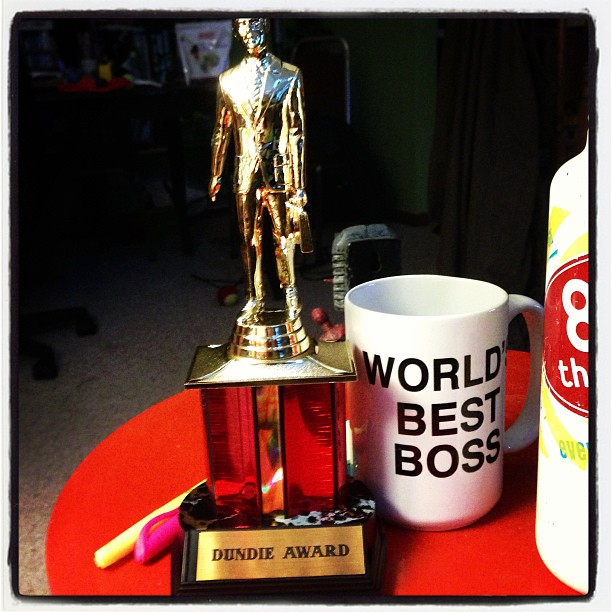 Without fail, it seems, the batteries in the various smoke alarms at Supergenius HQ decide to die at the most in convenient time. Today it was 5:25 a.m. which would suck most any day of the week, but sucked a little harder this morning considering how much tequila I had the night before.

I’m still a little amazed that I managed to find the 9-volt battery and get it installed without too much swearing or annoyance. In fact, I was so chill about the whole thing that I promptly collapsed back into bed for another three hours. Go me!

Of course that’s only because it was one of the smoke alarms upstairs and not the shitty, crappy smoke alarm in the kitchen that requires me to stand on a chair to change the battery, which requires at least two panic attacks and a lot of needless fear-of-standing-on-chairs anxiety. I hate that fucking smoke alarm.

Upon my second awakening I decided that I wasn’t going to mess around with any hangover bullshit, and promptly pulled on some pants and went in search of a Sausage Egg McMuffin. It was delicious and chased away any hangovers with designs on ruining my day.

I spent the morning eating my McMuffin, drinking my Mocha-Chocalatta-Ya-Ya, and writing a book review. Then I decided to spend a little time editing other book reviews for the much-neglected MN Reads. Also, I listened to that Jason Isbell record for what appears to be the 180th time this month. I am nothing if not obsessive. It has also come to my attention that I need to listening to something new — got any ideas?

This took us up to about 10:30 or 11 a.m. I’m not entirely sure. What I am sure of is that I curled up on the long brown couch with the rest of Saga Vol. 2 and Queens of Noise: The Real Story of the Runaways. While I managed to finish Saga, bringing my grand total of books finished this weekend to four, I only got about five pages into ‘Queens’ before I fell into a deep, deep, disturbing slumber.

Yeah, I had the accidental two-hour nap and it kind of sucked butt. First, I didn’t want to take a two-hour nap, I wanted to take a 20-minute refresher nap. Second, I had plans to finish reading the liner notes section of The Beast before the special Aunt’s Day Edition of Family Dinner. Also, lunch.

And what made the accidental nap extra sucky is that it was plagued with anxiety dreams about having to go back and re-do high school and me trying to figure out away of getting out it. Plus while I was sleeping part of my brain was all “GET UP! GET UP! GET UP!” and the other part of my brain was in cahoots with my body and was all “it’s so snuggly under this soft blanket lets sleep a little while longer.” 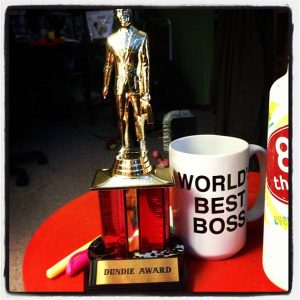 So I awoke for the third time today a little disoriented and grouchy and unwilling to do anything productive. That’s when I sat on the couch eating a Pop Tart and watching this week’s Project Runway. Eventually I made i through a few more pages of The Beast read-through Part II before I wanted to kill myself with my own pen.

Then, off to Sister #2’s for Family Dinner where we ate Davanni’s pizza in my honor. I love pizza but I rarely get it because I am cheap and it’s not often the I want to make that kind of 3-day pizza commitment. By the way, the pizza was delicious.

Jaycie & Max gave me the awesome Dundie award and the coffee mug for Aunt’s Day. The Tibbles forgot it was Aunt’s Day. I will exact my revenge on them sometime this week. Most of the dinner was spent as an extended rant session for Sister #3 who has had to live with the “vacationing” Sister #4 for the past ten days with four more days to go. And by “vacationing” I mean Sister #4 has taken up residence on her couch and only occasionally budges from that spot. We all had much sympathy for her, since we’ve all had to house Sister #4 for spell that long exceeded her welcome (something she fails to understand and takes entirely too personally, when really I wouldn’t even want His Royal Hottiness Prince Harry of the Ginger Goodness to stay at my house for more than three days).

And now I am here. Typing. Like I always do.