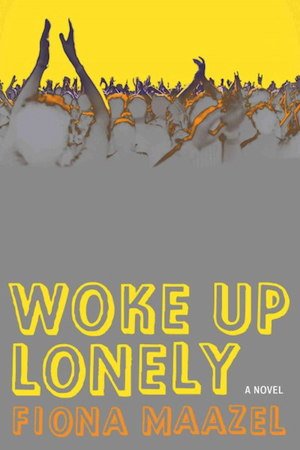 When you crack open Fiona Maazel’s Woke Up Lonely, strap in and just go with it. The more you give yourself over to Maazel’s dark satire the more you will enjoy your ride. Here’s where I exhort yourself to give in and don’t think about it too much. Because if you start the “but, really, is that even plausible?” you’ll just ruin everything and the ending of this book is so touching and sweet that it’s worth all the “hrmmm. . . .”

Oh, and before I forget, if you dig Vonnegut you will dig this one. Maazel’s got some Vonnegut about her and the fact that she drops his name early on in this novel means she gets it.

What we have here is Thurlow Dan the leader of a Scientologyesque sort of religious cult called The Helix. The thing that’s got the people all hyped up about The Helix is that it alleged to cure loneliness. Such a sweet idea. Dan’s got the US government all hyped up because he’s been hanging out in North Korea, and is allegedly fomenting some sort of armed revolution. Dan himself is all hyped up because he’s lonely, missing his ex-wife, Esme, and their ten-year-old daughter.

Esme, for her part, is some sort of covert US agent given the task of keeping tabs on her ex, the cult leader. She does this to varying degrees of success, often while in elaborate disguise. She’s also had to return to parenting their daughter after the untimely demise of her parents.

Wacky hijinks ensue when Esme cobbles together a team of four not-entirely-qualified or skilled agents to infiltrate The Helix compound in Cincinnati where they are taken hostage. The book spends a lot of time on the backgrounds of these agents: one has a wannabe documentarian with a gambling problem and a pregnant wife, another is a young cancer and sex abuse survivor looking for love, another is a nerdy guy who recently discovered he was not only adopted but has a twin, and the last is an older dude who is losing his long-time wife to The Helix. Through their stories we learn the myriad ways people can be lonely.

In fact, every single character in Woke Up Lonely is a lonely old mess and none of them can seem to figure out how to make a connection with another human being, which for me was the great, big beating heart of the book and really the parts I enjoyed the most.

Fiona Maazel has a bevy of linguistic pyrotechnics in her bag of tricks and there were times where I was truly mystified by what the hell was going on, like on a sentence level. I’d read a line and think, “what the hell does that even mean?” I also found my mind wandering whenever the story wandered into North Korea, which I blame on post-traumatic Orphan Master’s Son disorder than Maazel’s storytelling.

Eventually I let it all go because I could tell I was in sure capable hands. I’m glad I did. The ending, like I said, is so sweet and tender that it brought tears to my eyes. In a story so thick with dark satire it was quite satisfying to see a light at the end of the tunnel.