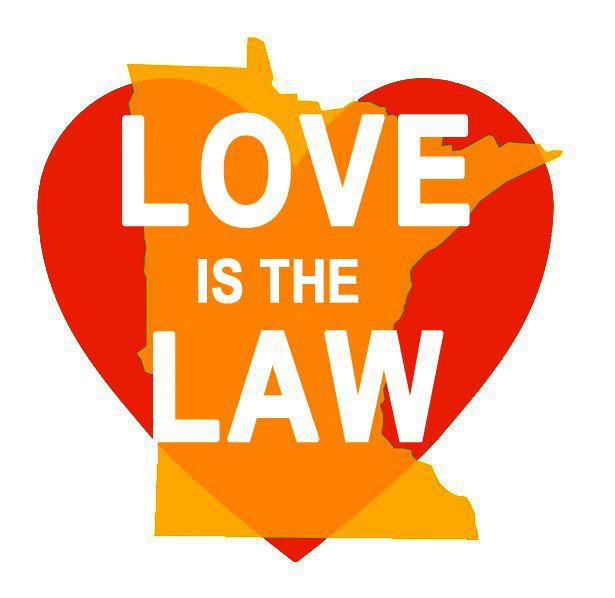 Just about twenty-four hours ago (as I type this), the Minnesota Senate passed a bill that would allow same sex couples to marry. We’re the 12th state in the nation to get our heads out of our collective asses and realize that all humans deserve the same rights regardless of their sexual orientation.

In about forty-five minutes (as I type this), Governor Mark Dayton will sign that bill into law and then St. Paul will burst out in rainbows & hugs & joy, because equality makes people happy. Want proof? Look at this wonderful photo series taken yesterday at the capital. The frowniest people are the ones who wanted to deny equality. . . and those pics were taken before the vote.

I watched the bill debated on the floor of the senate with a mix of outrage and flabbergast. At one point a Senator who sounds like Kevin from “The Office” said, “If marriage is about marrying who you love, where does that stop?” There were the kinds of arguments those who are opposed to marriage equality were giving. There was also a lot of worry about being able to discriminate against whomever you choose as long as you could fall back on your “deeply-held” religious beliefs as a reason for being a jackass. And Sen. Limmer (or maybe it was Gazelka, I can’t keep my assholes straight) was worried that by passing this bill we weren’t considering the rights of the few people who would maybe, possibly have to work with gay people even if their religion told them not to. Sadly, no heads exploded at the irony.

If you’ve ever argued with me about being from the flyovers (*cough*Hotrod*cough*) you know that I have more state pride than seems logical in a misanthrope. Most of my state prides starts with Bob Dylan and ends with Paul Westerberg and occasionally The Current, Prince, and/or Paul Wellstone get a nod. Oh, and so do corndogs at the Minnesota State Fair. And Post-its. Also, The Loft. And the 1983-84 Minnesota North Stars.

You get the idea.

I’ve never been more proud of Minnesota as I was when that vote came back yesterday, which is quite a turn of events considering how damn angry I was when they put a constitutional amendment on the ballot to define marriage as being between one man and one woman. And now, I’d kind of like to shake those bigot’s hand, because if their intolerance, if their narrow-mindedness hadn’t gotten that amendment on the ballot and had Minnesotans not voted no, I’m not sure we’d be here as #12. But we are here and I can’t wait for the rest of you thirty-eighters to join us.

P.S. I still give zero fucks about marriage in general and the sooner we let everyone who wants to get married marry the better, because then I don’t have to think about marriage ever again. Well, that is until I have to explain to John Cusack or Prince Harry why I must refuse his proposal because I don’t believe in marriage but we could totally shack up forever & I’d be cool with that.

@Anneflo He is, mostly so you donâ€™t want to murder him all the time for being so annoying.

@jessikate Iâ€™m a crocheter and people tell me the same thing. Ugh. No. I donâ€™t want to turn something I do for fun into a job.

@Wolfdog @windowseat Ohhhh. I wonâ€™t even allow myself to look at that stuff.