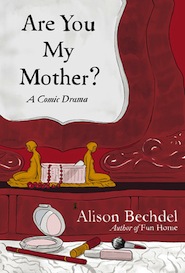 I usually have a strict 100-page rule for books. If after 100 pages I don’t care, am dissatisfied, or bored by the book I chuck it aside and move on. I didn’t do that with Alison Bechdel’s Are You My Mother?: A Comic Drama and I kind of wish I had.

I stuck with it for two reasons. First, my love for Fun Home: A Family Tragicomic can not be adequately expressed using mere words. Not only is the book amazing, but it also holds a sentimental place in my heart. It was the first non-superhero graphic thing I’d ever read. Okay, it was the second. But I hate Ghost World with a kind of fire that erases it from my memory. Anyway, Fun Home was a sort of “Owen Meany” experience for me. If not for Fun Home, I’d have never discovered Maus or Persepolis or, heaven forbid, Scott Pilgrim. It opened the door to the world of graphic novels for me, and for that I just couldn’t abandon Bechdel.

Also, I picked this for Rock & Roll Bookclub and how crappy would it be to abandon the book you’re foisting on the rest of the group?

Before reading Are You My Mother? I would have never guessed that you could get too personal, too close in a memoir. I would have thought the more personal, the better. I was wrong. The problem with this graphic memoir is that it’s too close. The reader is, literally, plopped inside of Bechdel’s sessions with her psycho-analysts and phone conversations with her mom, and as if that’s not enough there’s also the dreams that start every chapter.

Oh, it’s bad. Which is a damn shame because you’d think the territory she’s covering. . . the writing of her first book and how her mom handles it and then the writing of this second book is so damn interesting. Somehow the life gets sucked out of it. I don’t know if that’s because she spends a lot of time going into all kinds of psychobable from the books she’s reading or not. I know that as a reader I did a lot of eye-rolling because it just feels almost too navel-gazey. This is the kind of stuff that would only interest the person involved.

When Bechdel backs off the psychiatry and the Virgina Wolff and the highlighting passages from those books like a college freshman who is amazed they can write in their books, she’s good. I wanted more of a straight narrative and less of a “let’s examine my psyche and how everything that ever happened damaged me.”

I kind of wish she’d just told this story straight. . . I wrote a book about my dad, a closeted homosexual, who probably killed himself but we’re not exactly sure and this is how my mom and I dealt with the fact that I was telling the whole world our painful family story.

That, would have been gold. Instead we got a too-close look at a lot of things that while probably had a great deal of significance in Bechdel’s life come off as a little petty and pity-partyish.

Really, this one was just one big disappointing dud.