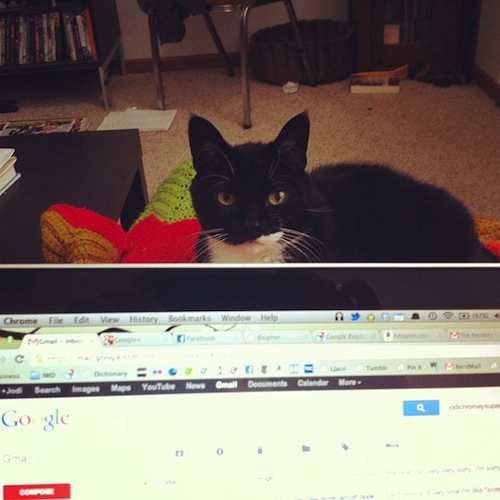 I don’t like zombies. I don’t find them funny or offensive or ironic or anything but annoying. And yet here I am describing myself as a sadness zombie because I can think of no other words to describe how I feel. I lurch about the empty-feeling Supergenius HQ without engaging my brain. When my brain engages I cry, and my eyes are sore from all the crying. I’ve spent hours since Saturday with my glasses off, head tipped back, and the cool bottom of my water bottle resting on one of my eyes in hopes of reducing the swelling.

Today, though, is better than yesterday. Yesterday was six episodes of Dawson’s Creek while working mindlessly on the sorts of projects that didn’t require too much thought. Yesterday was listening to the songs “Lloyd, I’m Ready to Be Heartbroken” by Camera Obscura and “Are you Ready to be Heartbroken” by Lloyd Cole and the Commotions twenty-two times in a row (this was before the Dawson’s marathon). I even pondered for half a minute downloading “Broken-hearted Savior” by Big Head Todd and the Monsters, but my brain came roaring back to life for 32 seconds and screamed “OH HELL NO.”

The irony here, if you go for that kind of thing, is that I never wanted to be a woman who blogged about her cats. For a long time, I was so much not the woman who blogged about her cats that my friends didn’t believe I actually had cats. It was the fear of being labelled a Crazy Cat Lady that kept me from writing about my cats. But eventually, I reached the point in my life where I didn’t give a damn what people think, and wrote about cat-penguin love and donut hole stealing.

Now, all I want to do is write about my damn dead cat because the mourning feels so singular, so lonely. He was my cat, and mine alone. I never shared him with anyone, and now I feel like it’s my job to make sure people know he existed and that he was important to me.

Madison, or as I often called him Mad Season (because of that 90s alterna-supergroup), was the one constant in the last sixteen and a half years of my life. Roommates, boyfriends, friends, jobs, they all came and went, with Madison by my side. In fact, once around the turn of the century I chose Madison over a boyfriend. The asshole had decided that if he and I were to move in together that Madison would have to go. I decided instead that the asshole should just go.

Paco, who has always been a pretty needy cat, is even needier now that Madison is gone. He spends a lot of time perched on the footstool (on top of my feet). This picture breaks my heart a little not because my house is a mess (careful picture viewers will see the Dawson’s Creek boxset splayed on the floor), but because in the background there is only one peanut butter cup where there used to be two.

I took Madison to the vet in his. He died in it, which I like to think he appreciated. It was one of his favorite spots, well that and the folded up paper bag next to the refrigerator. When I got home from the vet on Saturday, I threw Madison’s peanut butter cup right in the garbage. I thought having it there would be more painful than not having it there, next to Paco’s.

I was wrong, because it’s all painful. Walking from the garage into Supergenius HQ is painful, because I open the door and immediately look for Madison. He was a greet you at the door kind of cat. Being in the kitchen is painful because Madison was a demander and would want his water or food freshened every time you walked into the damn room. Eating breakfast, or well, frankly, anything is painful because Madison who was raised, that last semester I was in college, on Potato Oles and McDonald’s French fries, was a beggar. I always gave him the last sip of milk from my cereal bowl.

There’s nothing else to say. I’ve determined sadness zombies don’t need conclusions because saying anything other than I am sad and I miss my cat just takes more than I’m willing to give right now. Though I should say thank you. Thank you for your kind words of condolences and indulging me during my mourning.

@sliderwave He’s currently terrorizing Charles & Memphis, next time he comes by I’ll get one for you.

Today’s #DailyWendell song is “Never You Mind” by Semisonic because I listened to them all last week after that podcast y’all tweeted about. pic.twitter.com/KiP8rBDqdA

@RandBallsStu I was gonna be all “this is why I vowed not to pay attention until Iowa” and then i read the tweet again, and yeah I’ll take one lawnmower accident too.

@jonmbauer I did it on audio too, and that did not help matters for me.

@jonmbauer I’m the only one in my bookclub who finished it for THAT EXACT REASON. Honestly, if you’re a book quitter, I’d quit it. It does not get better/more interesting.