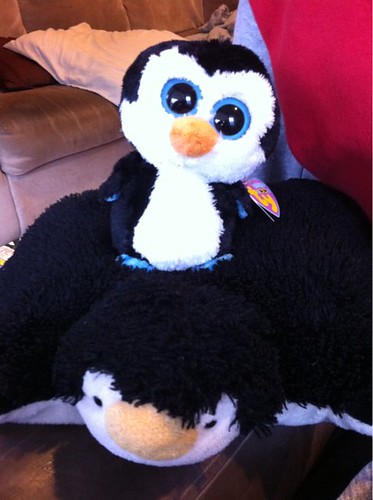 As I’ve mentioned before, Liam’s best friend/alter ego is a small stuffed penguin named Junior. The stuffed penguin spouts all the opinons and sassiness Liam would like to say but knows he probably shouldn’t, and let me tell you Junior does not like a lot of stuff.

Sometime last week, while I was acting mother of five (both Sister #2 & Sister #3 were away for work leaving Ben and I to wrangle the children), Junior and I had a little dust up. I can’t remember exactly what we were arguing about but it ended with me saying, in my most mature manner, “Fine, I’ll get my own penguin and call him Gunior.”
“No,” Liam shouted.
“How about Munior?”
“No!”

This, of course, went through the whole alphabet with Liam protesting loudly.

And because I’m a mean aunt bad lady, I promptly went out and bought the first $5 stuffed penguin I could find. Enter Flunior. There was an audible gasp from Liam when I pulled Flunior from my bag.

He grabbed Flunior and inspected him, and then opened the tag stuck in his wing. “These kinds already come with names. What does this say?”
“Waddles. But I’m calling him Flunior.”
“Waddles is a bad name but you should call him Bunior. Or Big Eyes.”

Liam handed the penguin back to me and grabbed Junior off the floor, tossing him into the air, and catching him. “Junior doesn’t like Flunior.”
“That’s okay,” I said. “Flunior loves Junior.”
Liam tucked Junior under his arm and wagged his finger at me. “You’re going to have one unhappy penguin.”