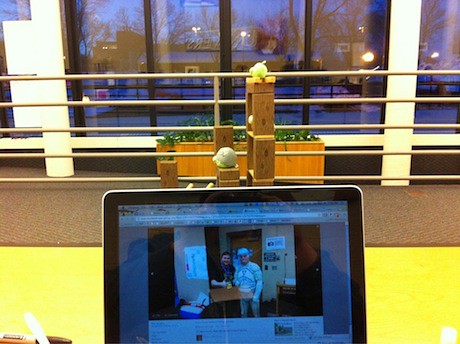 This was the view from the desk at the Continuing Education building on the UofM campus in St. Paul. A few of the things I witnessed during the seventeen hours I was perched behind the desk volunteering for The Nerdery’s Overnight Website Challenge:

I like to tell people that the only reason I get so weepy about the WebChallenge is because I’m tired and when fighting exhaustion it’s hard to fight tears. But that’s a total lie. The WebChallenge makes me weepy because it’s an emotional event that does so much good for so many people that I cannot possibly hold all the awesomeness of it inside and it just leaks right out my eyes.

It’s that kindness that’s so remarkable. My sister, who has spent more time in academia than in corporate America, was taken aback by the kindness. “I just didn’t expect them to be so kind,” she said. “You can just tell those Marks [two of the Nerds who helm the challenge] are kind the minute you meet them.”

The whole building is steeped in kindess for the entirety of the event. Webpros helping nonprofits, volunteers helping all those creating the websites, and nobody getting paid. It’s the kind of thing that restocks your faith in humanity for at least 364 days (until the next WebChallenge).

But this isn’t even the very best thing about the WebChallenge. No, even better than being a small part of helping 18 nonprofits get websites so they can help more people is that it is so much fun. It’s like a giant slumber party in the very best way that slumber parties were when you were thirteen — tons of bad food, silliness, and endless laughter.

I only stayed about seventeen hours this year. Ruby’s having some misfiring (according to Ben) issues and even that — car problems the most anxiety-inducing, frustrating problems to annoy a person — can’t harsh my WebChallenge buzz.

Seriously, the WebChallenge is probably the coolest, most heart-warming, thing I do all year. I’m a little sad that it’s already over for the year (and that has little to do with the fact that I had to prepare my own meals and own coffee today) and can’t wait until next year.

@rogrtheshrubber Same! The FB bickering is the only thing I want to partake in (and by that I mean reading & judging).

In case you’re wondering what the Blainetucky class of 1990 is doing, they’re arguing on FB over whether the pandemic is a valid reason to postpone our 30-year class reunion. #IHateItHere #SkippedAllOfThemSoFar