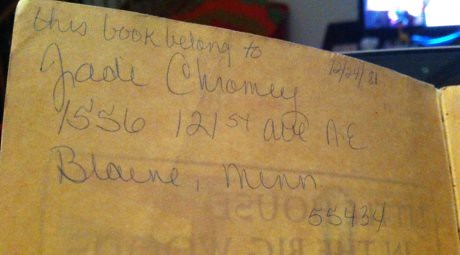 This is the inscription inside the cover of my copy of Little House in the Big Woods by Laura Ingalls Wilder. I cropped it out, but my phone number was on there too. Only seven digits because we didn’t have to use area codes back then. We are 612s. I haven’t lived at that address for over twenty year and I just did some math and realized that come Christmas I’ll have owned these books for thirty years. They just might be the objects I’ve owned the longest.

I bring this out as away to demonstrate just how much I am the target audience for The Wilder Life: My Adventures in the Lost World of Little House on the Prairie by Wendy McClure. Going to bed at night and opening this book is often my favorite part of the day. McClure’s writing is hilarious and very conversational, which is why I sometimes find myself arguing with nobody in particular about what I read in the book.

For instance, at one point McClure is talking about a made-for-TV movie about Little House on the Praire and said something about how the actress who played “the crazy girl from the second season of ‘Dawson’s Creek'” is in it. My first reaction was, “I think I love you.” Because I always feel immediate affection toward anyone who mentions Dawson’s. My second reaction was, “who the hell did Abby Morgan play in Little House?” Of all the Capeside citizens, Abby Morgan is the most un-prairielike of them all.

I brushed it off for a few pages before being forced to grab Ziggy from the bedside table and do a bit of Googling. Turns out McClure was talking about the actress who played Andie McPhee. Huh, I thought, that’s interesting. In my eyes and how I use the word crazy, it’s a much more apt description for Abby who was manipulative, evil, and brought pain to people for her own amusement. It was not a description for Andie who suffered from depression, an actual diagnosed mental illness.

Somehow, in my mind, crazy feels like a really dismissive way to describe mental illness.

You see, I’ve been engaged in a long battle with Sister #2 on the evolution of language and words that paint you as culturally insensitive when you use them. (see the “retard revelation,” but please do not search I Will Dare for that word. It’s bad, and makes me want to pull a Huck Finn and cleanse the site of my own ignorance.)

If I were to ask someone what “Susan is lame” means. I would bet that nine out of ten times people would identify Susan as someone who was uncool or not smart and not that Susan walks with a limp.

I was really gaining headway in this battle until I told her about being taken aback by The Wilder Life.

Damnit. I’m still in love with The Wilder Life even though it has totally weakened my argument. So lame.