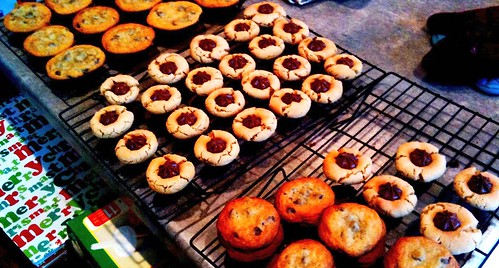 There is much controversy that swirls around the Holiday Cookie Bakeathon. This year, the 2nd annual, was rife with conflict much of it caused by last year’s bakeathon dubbed “The Great Snubbing of Aught-Eight.” Last year Sister #2 decided she’d ring in the holidays by baking cookies for all her family and friends. Then she spent the day with Ben, Jaycie, Max, and Sister #4 concocting all kinds of goodies. I saw the pictures.

She then proceeded to litter the greater Shakopee area with boxes filled with homemade cookies. Somehow she must have forgotten the directions to Supergenius HQ because nary a crumb found its way here. There was sadness throughout the land. Though Sister #2 claims that I did share in the glory of last year’s cookie harvest, she’s wrong. Dead wrong. Even Jaycie who has a memory like me and Sister #4 agree that there were no cookies in Jodiville.

So when I found out a few weeks ago that Sister #4 who has relocated to South Dakota had been invited to Holiday Cookie Bakeathon II I did what any well-meaning, slighted cookie lover would do. I invited myself over. And I brought homemade beer cheese soup. Who wouldn’t want me?

Sister #2 apparently. There was much slander thrown in my direction, she even stooped to demean the one cookie I know how to make. “You can’t screw up Monster Cookies,” she said, wounding me to my very core.

She then went on to criticize the way Jaycie and I had made the chocolate chip cookies. Apparently you can improperly mix in the flour and then all hell breaks loose. Who knew? Baking is hard, which is why I prefer soup. Soup is easy compared to the chemistry bullshit involved in baking. Meanwhile Sister #4 whined about how she didn’t drive three and a half hours to watch cookies being made, she wanted to participate. But we mostly ignored her.

Our petty bickering continued through most of the afternoon and on into the night. I spent a lot of time giving Sister #2 the finger whenever she turned her back, much to Max’s delight. Eventually my BFK joined in the festivities, having stumbled across the alley after downing a bottle of wine at her house.

She and Sister #4 lectured us on the South Dakotan delicacy known as chislic. I shudder in horror at the thought of it.

At some point, after a few glasses of wine, my mom arrived. She sat down in the kitchen to survey our work. Within ten minutes my sisters and I started telling on each other. She did this, and she said that, and she gave me the finger.

During a lull in the tattling BFK looked across the table at my mom and said, “This must have been what it was like every day when you got home from work.”

About this time, Sister #2 wiped her arm which was full of frosting all over my shirt.

“You ruined my best Twins shirt,” I shouted and immediately burst into tears. I wish I could say it was because such great acting skills, but really I was laughing at my own joke.
“You’re just mad,” she said, gasping for breath through her own laughter, “that you’re going to have to wash it before you wear it again.”

Everyone in the kitchen was awash in laughter, and it was one of those moments where if I wasn’t already crying from laughter, my eyes would have leaked from the joy of it all. Sitting in a warm kitchen with my friends and family laughing until their throats hurt, the smell of melted chocolate lingering with the wine. It was heaven and even though Christmas hasn’t even arrived, it will probably be my favorite moment of the holiday.

My second favorite will be when soon after the laughter died down Jaycie, who is 12, scolded Sister #2 for referring to the cookies as Gingerbread MEN.