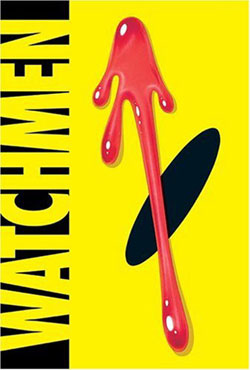 I’ve been slowly picking through Watchmen since about September. I’d get so far in the book and then come to the poorly written autobiography stuff and stop. I’d pick it up a few weeks later and have to start all over from the beginning because I had no idea what was going on.

During the Superbowl, the TTHM said that reading all the crap between the comic book parts wasn’t necessary. Wolfdogg had told me the same thing before, but having that idea reinforced was comforting. Thus, reinvigorated I decided to give Watchmen another go. I am nothing, if not resiliant.

My desire to read the book was mostly borne out of the high esteem it is given in the graphic novel canon. People (men mostly) talk about it in reverent tones with dreamstars in their eyes. It’s like one of the high holies alongside Maus (which I haven’t read) and Jimmy Corrigan (which I also haven’t read, but own and will read sometime this year in the name RP2009).

The characters have no depth, no life, they are flat and dull. I have no idea (aside from maybe Rorschach who is the only interesting one in the lot) what motivates them, what they want, or why they exist. The story is confusing. There are stories within stories within still other stories. And since I don’t find any of the characters interesting, I don’t care enough to figure out what exactly is going on, thus the book is a big zzzzzzzzero.

I blame the fanboys for my apathy. It is their reverence, their grand pedestal upon which they have placed this book that has ruined it. There is no way the book can possibly bear up under the weight of such adoration. I’m not sure what Watchmen would have had to do to meet my expectations, but whatever it’s doing it’s not working for me. This is the very same reason that I will never see Star Wars. It cannot live up to 30 years of hype.

So, I’m calling it quits. Watchmen can suck it. I’m going to go spend my time reading something that makes me at least care about what the hell’s going on.